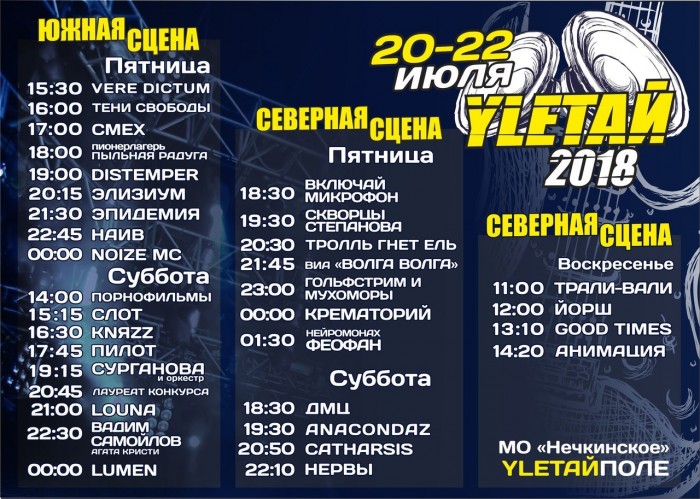 Festival "YLETAЙ!" is held since 2007 and each year gathers under the open sky, a few thousand people and about three hundred musicians from all over Russia. The participants of the festival each year, groups from Udmurtia, Tatarstan, Perm territory, Moscow, St. Petersburg and other cities. The culmination of every festival - the traditional speech of the chief guest of the festival - the famous Russian group.

This year the Festival YLETAЙ changed the location-he had his own festival the territory of the "fly box". The new site is located in MO nechkinskoe, Lagunova village (12 km. from Nechkyne). River Necking.

1. The area of 50 Hectares.
The increase in campsites in three times the opportunity to arrange football, volleyball and other sports courts, children Playground.
Infrastructure will be larger, the logistics easier. Will not have to overcome kilometer distance from the tent to the stage or to the car, up the hill.
Playground smooth, with a slight slope (amphitheatre) in the direction of the scenes.

2. High place, a field with many years of hard turf. The lack of flooding, wetlands, and dirt. This is important for car Parking in case of rain. Beautiful view. Around festival fields forest hills.

3. The increase in throughput. A three-entry instead of one! We'll get rid of long queues!
Increase the number of Hiking turnstiles from three to ten, so as not to keep guests in line at the entrance.

4. The territory is equipped with stationary electric substation. The area is lit by floodlights. For those wishing to charge smartphones will be created special areas of household services, Wi-Fi zones.

5. On this territory there are aquifer wells. Be organized-showers, toilets, as always, will organize the sale of available drinking water.

6.Settling fenced camping for motovational and willing to put up a tent near the car.

7. At the site there will be two large stages with led screens on the edges.

8. On the territory will run a cafe and catering various price categories.
Also not prohibited to bring any food with them. Meat, kebab, charcoal-please bring your own.
You can build a fire in the grill, to use gas stoves and kerosene stoves.

10. The hotel operates a tent with a fenced yard, toilet, water.

The cost of renting double tents-5000 rubles for the whole festival (price for two)
Triple tent - 8000 rubles for three.
Children up to 12 years free without extra bed.
The price includes: pre-set tent, two or three tourist mattress, two or three sleeping bag according to the number of seats.
And also, the use of campfire, tent, firewood, charcoal, grill, water, toilets.
The hotel territory is fenced, round the clock security administrator.
ATTENTION! THE SPACE FOR THE INSTALLATION OF THEIR OWN TENTS FREE, AS ALWAYS!

The ticket price this year is 2900 rubles.