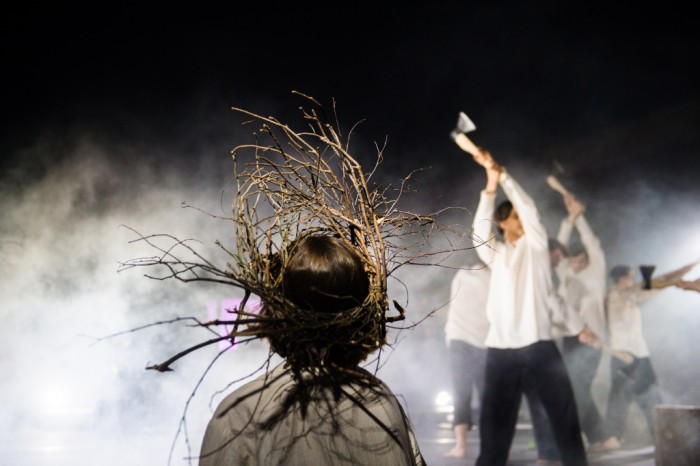 The timing of the festival:
14-18 Aug 2018
The venue of the festival:
TYUZ them.Bryantseva (pioneer square,1) the New stage of the Alexandrinsky theater (Nab.R.49A Fontanka) the Front yard of the Yusupov Palace (Nab. Moiki 94
A visa is required:
For citizens of Russia is required

Anniversary of the largest and oldest Russian festival of contemporary dance OPEN LOOK will be marked by shock week street protests and the Russian Premier, master-classes of foreign teachers, performances, site specific and Butoh performances.

OPEN LOOK for the viewer is always discovering new names, dance companies and new theatrical forms. This year is also the opening of the dance aesthetics of new countries in Asia and South America. In a row with performances from the Netherlands, Israel, great Britain, Spain, Poland will stand the works of dancers from South Korea, and even Chile. But most importantly, OPEN LOOK will present what worked for all these years – the best in Russian dance performances of troupes from Chelyabinsk, Kazan, Moscow and St. Petersburg.

For the first time in Russia, within the framework of the OPEN LOOK, August 14, will perform the Korean national contemporary dance company with the production of "reflections on the rite of Spring. The Image Of The Rose." Viewers will see the combination of Korean traditional dance with modern, you hear in the performance of Korean folk instruments specially written for productions the composer's music RA Eson as homage to the great work of Stravinsky.

Unique movements created by the choreographer Ahn Seung-soo, come from constant experimentation and discarding stereotypes of the genres. The choreography develops flexible and dynamic, it is new interpreterpath rhythm where the dance moves and breathing are the transformation of the drum sounds. The performance will precede open to all public-talk composer Vladimir Rannev with Korean women composers RA Eson, in a joint project of the festival OPEN LOOK to the school Masters.

August 16 in the courtyard of the Yusupov Palace on the Moika performance-presentation of "Birth of the Phoenix" show is one of the leading companies in Israel's "Vertigo". Under the sky of St. Petersburg inside a geodesic dome, one of the most beautiful Palace complexes in the real scenery. Play like a mythological bird arises from the ashes and disappears at sunset. Five dancers will show the unique beauty and way of performance dance project about humanity beyond the stage. Dialogue with the surrounding space and audience allows you to create a circular Seating arrangements and the possibility of review under 360 degrees. For the production will be brought more than two tons of special soil, the dancers work with the elements of fire, air, water and earth.

In General, the theme of ecology and a return to origins and roots of origin, to OPEN LOOK in 2018 will be key. It will carry the leitmotif of the performance "Forest" workshop of Dmitry Brusnikina (Moscow), the show "Call the beginning" (Creative Association "Alif"), by Nurbek Batulla became the owner "the Gold mask" this year. The play addresses issues of self-identity of the Tatar people through language and alphabet. In the play the role of vocal components and musical instruments. In General, the synthesis of dance and live music on the stage – trend OPENLOOK 2018 and this will be reflected in several performances of the program.

Tactile play "-Touch" Katrin Reshetnikova, Butoh-performance of Anne of Garafeeva "CAMILLE", the performance "Soul No. 2. Performer" the Dutch choreographer jérôme Meyer is an immersive page in the schedule OPEN LOOK 2018. It is the experiments that have already become a professional trend in the development of contemporary art and its integration with dance, music and drama.

The separate place in the program of the festival is the residents of the house of dance "Cannondale". The play "Thunderstorm" choreographer Ksenia Mikheeva, Prime Minister Oleg Stepanov – "neutrino" with the band "Workshop Natalia Kasparova", a joint project of Ksenia Mikheeva and Valeria Kasparova "waiting for Godot" and "gravity" and "War" dance Theater Sasha Kukina.

In the Russian part of OPENLOOK will also be presented in Chelyabinsk the "Cardboard" from luminaries of Russian contemporary dance Olga pona. "Standby for Godot", the recent premiere of the theatre "Ballet Moskva" and "the universe is DQ. Producing endorphins" dance performance based on the story of Borges choreographed and performed by Konstantin Matulewska and Sofia Gaidukova.

"We want to bring together the leading choreographers of modern dance of Russia in St. Petersburg to develop ideas, plans, prospects, to identify further ways of development of Russian cooperation in the field of contemporary dance for a new starting point," says Vadim Kasparov, the festival Director OPENLOOK. "In St. Petersburg, where over 27 years ago, modern dance was in its infancy, unlike Moscow, Yekaterinburg or Kazan, there is no state structure to support that direction, and we want to change that — to give a new impetus to the development of modern dance in Russia"

August 18, the last day of the festival, will be ZERO performance from a British company Humanhood. Fascinating interaction between the two dancers like a ritual journey that gives the opportunity to travel to a fantastic world of imagination and beauty, with an unusual sound and lighting solution. Dancers with Radicola (Birmingham) and Julia Robert (Barcelona) has worked with AkramKhan and JasminVardimonCompany.

The five-day programme CIAChecoeslovaquia (Chile) will combine choreography, sound design and multimedia programming. The objective of the laboratory is the search for natural motion and movement in space technologies involved, even the practice of automatic writing. This is a creative center located in Santiago. Different artists have the opportunity to work in this format of the residences and to create new work. Dancers, designers, media artists and choreographers cooperate with each other, combining dance and media tools.

The festival will end on 18 August with a performance of the AKHE theater's "gap-Filling" ("Gapfilling") in cooperation with the KANA Theatre (Poland) on the territory of the Museum of Street Art. In this part of the play has never been presented in St. Petersburg. This is a lyrical episodes in containers on the eternal relationship of men and women from childhood to old age, told by actors and tightrope walkers and sung by the boatswain and ballerinas, designed by engineers and cartographers. The characters are not locked in their cell, they can move between them, peretasoval, entering into other people's stories and appropriating them.

In this year theoretical lecture program OPEN LOOK, prepared jointly with the school Masters, has expanded. Nick Parkhomovskii Olga Tsvetkova will hold a lecture and workshop on "social dance" and the ballet critics of Moscow and St. Petersburg in the framework of the concert program of the festival will read a series of thematic lectures.

The year of jubilee "strengthened" the names of the teachers of the master classes from the best European companies, after all, to study summer in St. Petersburg comes all the dance community of Russia. Fernando Troia (Spain/Netherlands), Litesport (Netherlands/Israel), Jing And Wang (Sweden/China), Mamalia Dor (Israel), and Deryusheva (Poland), Julia Robert and Rodekool (Spain / UK) – these teachers will conduct classes in diverse dance techniques from contemporary and improvisation to author tech — touch-body and technology "anchors".

20.00 "reflections on the rite of Spring. The image of the Rose", Korean national contemporary dance company (South Korea);

The FRONT YARD of the YUSUPOV PALACE (Nab. Moika 94)

21.00 "Birth of the Phoenix", a street performance VertigoDanceCompany (Israel)

August 17, the New stage of the Alexandrinsky theatre

CENTER of art and music Bibl. them. Vladimir Mayakovsky (Nevsky 20)

15.00 - CiaChecoeslovaquia(Chile). A special project of the festival OPEN LOOK "From the subconscious to create illusions on the stage of" media center

THE CLOSING OF THE FESTIVAL