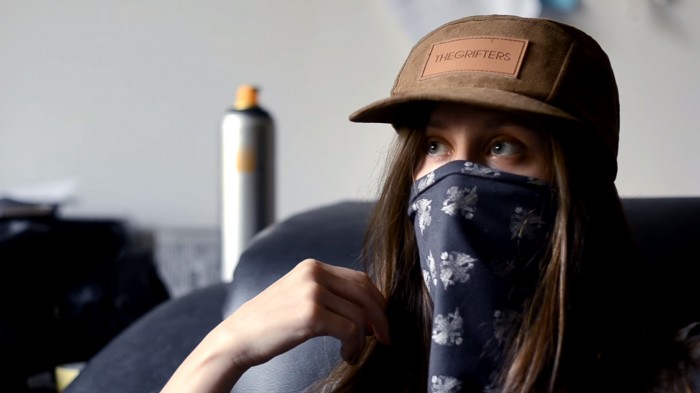 For the first time in St. Petersburg, will host a festival of non-commercial documentary film about graffiti and street art "StreetDoc". Who are German and Brazilian, transitory picadores? How to succeed in the world of graffiti is graffiti? Who are the protagonists of Russian and foreign street-art scene? The answers to these questions, viewers will find the movies. The festival is organized by the Institute for the study of street art and the Foundation "InLoco" and is part of a special program of the Biennale Artmosphere in the framework of the project "KARO.Art".

The program presents films shot in the Czech Republic, Russia, Ukraine, Italy, France, Germany, some of them are Russian premieres. Will watch six feature films and a selection of short films.Навечернихartist'stalk the audience will have an exclusive opportunity to interact with characters and filmmakers, will present their works: Amir Eskandari, Bjornberg, as well as the Czech artist Sleigh.

"Street art is a great communication tool! I didn't know that my film is so popular in Eastern Europe and proud that the film Unlike U will be part of the festival. This will be my first visit to Russia, so I'm looking forward to meeting wonderful people as I believe that art has no boundaries," says German registermember.

СоздателиUnlike U: TrainwritinginBerlin entered into the world, hidden and closed from outsiders. This is the world of the legendary Berlin transition (trainwriters) — graffiti artists specializing in painting trains and trams, one of the most extreme types of graffiti. The passion that you have berlinkalender, captivates and inspires.

PIXADORES is a film about young guys living in the favelas-the slums of the Brazilian city of Sao Paulo, where every day is a struggle for survival. Their whole life is dedicated to "Picasa" - a unique form of protest street art, born in são Paulo. Covering a wall acute social statements, Picadores protest against Brazilian society with its class inequality.

Who are they — women-writers? ФильмGIRL POWER documentary, which was filmed seven years, presents the story of fifteen successful women-writers from various cities, from Prague to Moscow, from Cape town, Madrid, Berlin, Barcelona to new York and Sydney. It is believed that graffiti community atomoscow the world, "not for girls". However, in recent years, more and more magazines, websites and exhibitions, who is a female graffiti. One of the subplots of the film is autobiographical and presents the story of a Czech artist under the pseudonym the Sleigh. The camera captures double gingerine - on the one hand family and work, with another —night forays into the city and graffiti art.

Documentary OldSchool. Ukrainiangraffitidocumentary is a unique look at the formation of the Ukrainian graffiti scene, his goal is to record the stages of development of the subculture in the period from 1994 to the present. It is a compilation of interviews with leading representatives of Ukrainian graffiti scene. Project participants include the members of the cult of the WSK teams, CBKGB, IK, FRB, A4.

Premiere of Russian artist Nikita Nomerze OPEN was held in December last year. Somers a few years traveled to Russia, collecting information, meeting with artists and graffiti writers from different regions. The result of this study formed the basis for the film, which could be called an encyclopedia of Russian street art.

КинолентаFAME is a story about the eponymous Italian festival, about how Anselmiana managed to turn a provincial town Grotle in the South of Italy in a real Museum under the open sky. The tape shows how a town in a sleepy province wakes up: on asphalt spill a whole liter of paint, and passers-by continually witness the eccentric performances performed by such well-known street artists like Blu, JR, OsGemeos, Swoon, Momo and.

Festival "StreetDoc" is an opportunity to hear direct speech of the characters of the streets, as the festival program, collected the films, created with the direct participation of artists. The street is open to all, so the focus of attention be as the stars of the first magnitude, and those who prefer to act incognito. Taken together, the stories create a very clear picture of what is living street art and graffiti subculture.

The films are in original language with Russian or English subtitles.Curator of the festival "StreetDoc" — Maria udovydchenko.