Festival of Japanese culture in Samara 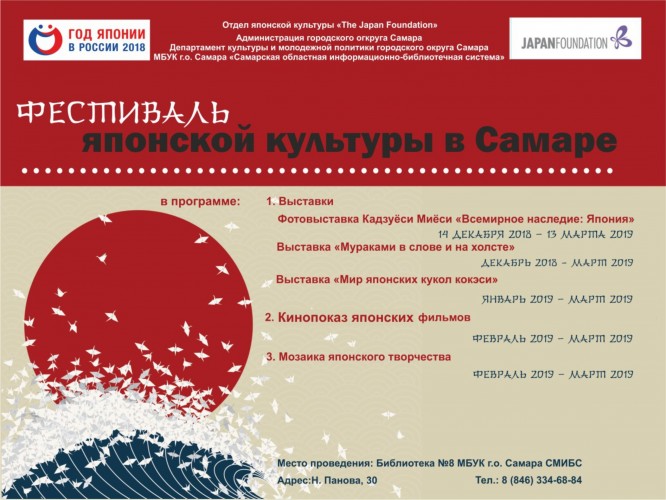 26 may 2018 in Moscow at the Bolshoi theatre, the Russian Government and the Government of Japan organized the opening ceremony of the Year of Japan in Russia and year of Russia in Japan under the slogan of "Deepening mutual understanding through engagement with culture and art." From this moment started a year, during which Japan and Russia held a variety of activities designed to deepen mutual understanding between the two countries.

The Prime Minister of Japan Shinzo Abe in his greeting said: "I Hope that the various events of the Year Japan held in different places, will give the Russians the opportunity to touch the real Japan, to deepen their understanding and feel even more sympathy for our country."

President R. F. Vladimir Putin said: "the Year of Japan in Russia is a part of the "cross years", held for the first time in the history of relations between our countries. The main goal of this large-scale project to acquaint Russian citizens with the history and modern life of Japan, with its achievements in the sphere of economy and high technologies, health and education, culture and sport."

In Samara, the Year Japan is coming in December 2018. Samara municipal information library system (SMIBS) in collaboration with the Department of Japanese culture Japan Foundation in the all-Russian state library for foreign literature M. I. Rudomino (Moscow) carried out in the framework of the Year of Japan in Russia "Festival of Japanese culture in Samara".

From December 2018 to March 2019, residents and guests of Samara will be able to get acquainted with the works of famous Japanese photographer Kazuyoshi Miyoshi of "World heritage sites of Japan" submitted to the world heritage list of UNESCO. Visitors also expect the exhibition "the World of Japanese dolls Kokeshi" and "Murakami in word and on canvas" provided by the Japan Foundation.

The festival will be organized games and creative master-classes of Japanese art, and well-known film critic Valery Bondarenko will present the best Japanese films in the framework of the cycle "film Screening Japanese films".

14 December 2018 at 12.00 in the premises of the library №8 SMIBS will be the Grand opening of the "Festival of Japanese culture in Samara".

On the opening day of lovers of Japanese culture awaits the presentation of the photo exhibition of famous Japanese photographer Kazuyoshi Miyoshi and lecture Valery Bondarenko "the Traditional principles of understanding the world and Japanese cinema".

"The festival of Japanese culture in Samara" - Japan in Your CE