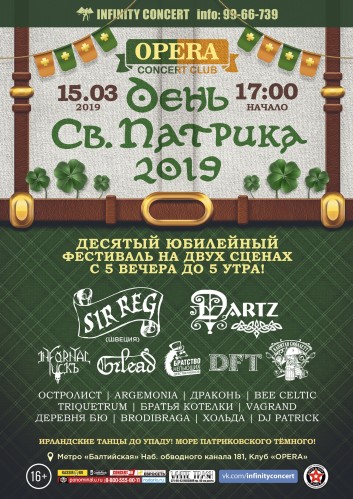 The timing of the festival:
15 Mar 2019
The venue of the festival:
Opera Concert Club embankment of the bypass channel, 181, Saint-Petersburg
A visa is required:
for citizens of Russia is not required

Fans of Irish culture, dancing, beer and whiskey, and all sorts of green follies - March 15 we will collect you on the greenest holiday of the year!
A fun and drunken St. Patrick's Day is a great opportunity to bring back the spring into our hearts and have some fun after a long winter evenings. Everyone can be Irish on this day!
Waiting for you specially brewed for the holiday special Patrikovsky, a true Celtic fair, a knock spark heels will help bands on two stages at the head of the headliners of the festival - Sir Reg.
Sir Reg - an Energetic sextet from Sweden playing great Irish-punk. Assembled it the Irishman Brendan Sheehy, who left his native Dublin and arrived in Sweden to fulfill his dream - to collect the most amazing group of all. And he did it! for a very small story, Sir Reg has already received several major music awards in Scandinavia and won the love of fans across Europe.