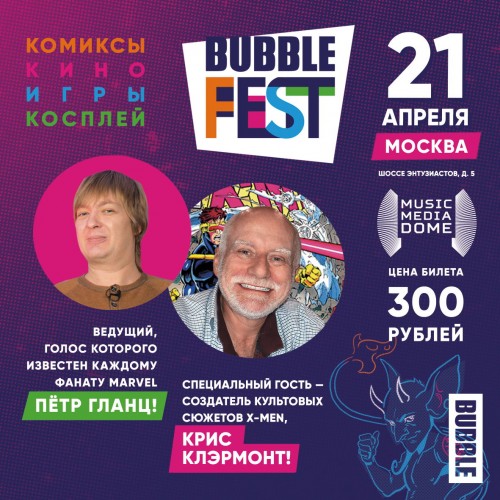 The first major festival from the most popular publishers of comics in Russia! On one site there will be presented the most famous areas of pop culture: movies, comics, games, cosplay. Popular bloggers, exclusive novelties, the excellent concert program — all this awaits you!

To BUBBLE FEST, you will have:

– Special guest – CHRIS CLAREMONT! The author of the classic stories about the X-Men, which formed the basis of Hollywood blockbusters — "the Saga of the Dark Phoenix, Days of future past", "Wolverine" and many others!

– The host of the event Peter Glantz! One of the most famous Russian actors dubbing. The main voice of the Joker MARVEL — Deadpool and Pikachu, Spock, Prince of Persia and another couple of hundreds of famous characters!

– new items and exclusives from major publishers of comics Russia

Come April 21 in Music Media Dome at shosse Entuziastov, 5, building 2 and dive into the fantastic universe of entertainment!

BUBBLE FEST is the main spring festival geek and pop-culture in Moscow. Get at him first!