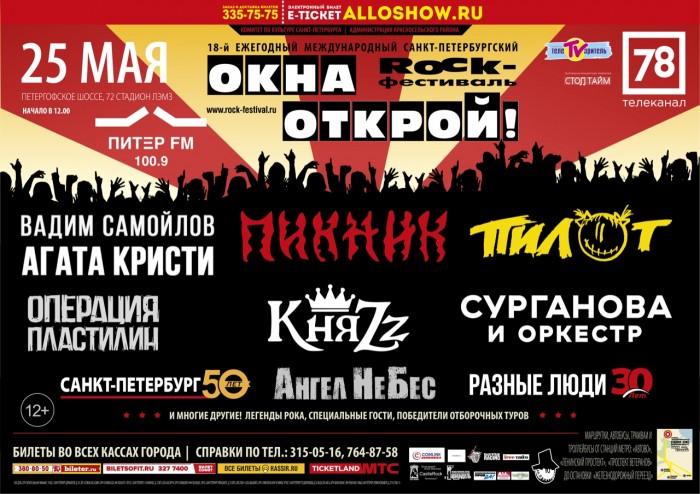 The annual St. Petersburg rock festival "okna Otkroy" will take place in 2019. The event will be held may 25 at the stadium LEMZ.

Two musical scenes, 200 kilowatts of sound and light, over 30 bands!

The Gala concert will take part the legendary and popular rock groups, as well as special guests, the winners of the festival from previous years and the winners of the qualifying rounds from different cities of Russia and abroad. Offers ten hours of the real and the live music non-stop, as well as interactive performances, exhibitions, games, contests and competitions. As usual, will operate an extensive shopping area with food and rock memorabilia, as well as a separate Playground for the youngest visitors.

The festival returns to the admirers of rock music, according to tradition, a year later. "Window Open" is a large - scale youth festival, the largest open-air North-West, a significant event in the cultural life of St. Petersburg! We can safely say that the "Window Open" are a continuation and logical development of the tradition of the legendary rock klubovskiy festivals. Here, as there, the performers try to show the best achievements for the year. The participants are constantly changing, which makes the event unpredictable, urgent and long-awaited!

A significant difference between "Windows" from the capital of festivals - the absence of pathos, the "Window Open" is not a parade of stars, and one of its main tasks the organizers believe support young bands, creating the most fruitful environment for the development of the independent rock movement. The eminent Jury of the festival in no way restricts the performers - no stylistic, geographical or age limits, in the Gala concert can take part of any group that in a fair fight, will overcome all the qualifying stages. So it was always here and past festivals have generated fruit on them at the time, for the first time declared names are now known to all groups: "the king and the Clown", "Pilot", "spleen", "Animal Jazz", "Torba-na-Steeper", "Billi''s Band", "Psyche", "P. T. V. P", "angel Heaven", "Ploshchad Vosstaniya", "IOWA", and many others.