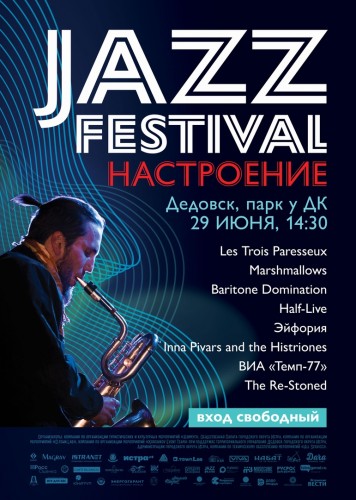 The sound of Bossa Nova and what is brass? What do psychedelic rock, Baroque music and style of vocal-instrumental ensembles of the Soviet wave? Why the saxophone can be a baritone?

If you do not know it yet, then you definitely need to arrive on June 29 in the Moscow suburb of Dedovsk! This year, the traditional, already ninth in a row, the summer like jazz festival "Mood" is once again ready to surprise Dedovka and guests of the city. Last year one of the teams of the festival is the Moscow regional Philharmonic, so it will be this year.
Musicians will fill the atmosphere of a summer Park, the magic of music, freedom of expression and drive. The organizers have prepared a splendid musical program that will not leave anyone indifferent spectator. You will see performances brilliant performers of both traditional and unusual experimental jazz and original rock music. From the very first year festival for his script like a musical encyclopedia: the bands perform in the genres that demonstrate the sound of the 60's, 70's, 80's and modern jazz and quasi-jazz styles.
Four of the team are already familiar to viewers of the festivals past: a group of "Half Live", some of whose members already played in the futuristic ensemble "1/2 Orchestra" rock-n-roll band in the style of 50-ies of the "Marshmallows"for the lead female vocal trio, an improvisation trio "Baritone Domination", light and summery jazz chanson in French in "Les Trois Paresseux".
Festival "Mood" is a feast for the whole family. Adults can relax and enjoy a laid-back jazz atmosphere under the open sky, and children a special program of free entertainment with contests, prizes and outdoor games. Theatre-lovers and retro aesthetics of the Soviet VIA will see a group Inna Pilars – the actress of theatre “Lenkom” and VIA “Temp-77”, which will perform a rock version of the legendary performance of this theatre music Suite “til” to the music by Gennady Gladkov in the adaptation of Cyril Rootless. His speech musicians “Temp-77” will dedicate the memory of the performer of the role of til Nicholas Karacharovo sang the role of til in the years of triumphal shows of this play.
29 June at 15:00 in the Park near his Grandfather's Home culture.
Admission is free!