The festival "White nights in the attic" 2019 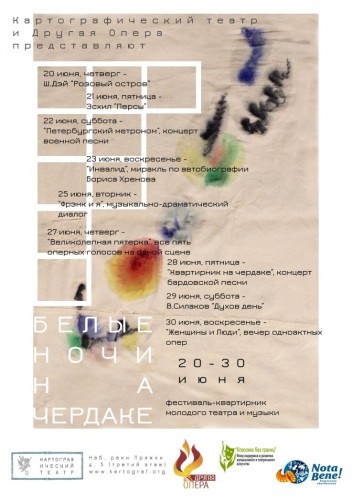 Theatre "the Other Opera", the third season holds the best reputation of troublemakers and one of the most interesting art house theaters – Theatre Map – invite to a surprisingly unusual festival during the mysterious and beautiful white nights at the address: embankment of the river Buckles, 5 (metro Garden). Agree, the white nights do not want to sleep. When you walk along the streets of light, woven out of sea air and hope, I want something really extraordinary, incredible and even a little bit impossible. Breathe easy and believe only in good. In St. Petersburg it is the time of year, time of dreamers and poets, and will open a new festival.

"It's St. Petersburg story - say its creators - we lived and worked in many cities around the world, we crossed the ocean and changed eight time zones to visit in a fantasy new York, as strange reflection similar to the Northern capital, but returned back to St. Petersburg. To its unique atmosphere. To summer insomnia. To his audience with deep eyes, special is the fact that they are from St. Petersburg. And we wanted to do something on the Petersburg spectator, St. Petersburg, not only by birth, but in spirit, no wonder they say that "Petersburger" is a special state of mind – discreet and low-key, without pathos and big words, and appreciate the true Petersburgers. In a city filled with oxygen. But oxygen is better to breathe under the roof – closer to the sky. And so was born the idea of the festival "White nights in the attic", which will be held in one of the most interesting halls of our city with the atmosphere of St. Petersburg and at St. Petersburg".

In the framework of the festival June 20 to 30 at a unique art space in this loft in the heart of Kolomna, the legendary "old town" – you will see the premiere of the dramatic and musical performances staged by young Directors from St. Petersburg and new York, concerts of classical music and military bard.

I need you to come to St. Petersburg attic for oxygen, breath easy and unforgettable impressions!

Program of international music and drama festival "White nights in the attic":

June 25, Tuesday – "Frank and I", musical-dramatic dialogue between Frank Sinatra and ava Gardner;

June 27, Thursday – "the famous five", all five of Opera voices, from soprano to bass, on the same stage;

June 28, Friday – "the jam session in the attic", a concert of bard songs;

30 June, Sunday, closing the festival – "Women and Men", an evening of one-act operas about the lonely and brilliant.