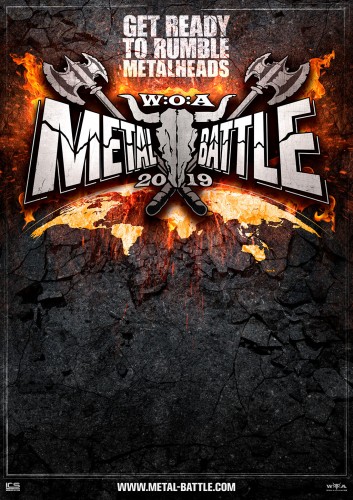 W:O:A METAL BATTLE RUSSIA FOR THE FIRST TIME IN RUSSIA!

Don't miss the opportunity to perform at the legendary German metal festival Wacken Open Air as the most worthy group-representative of Russia!

W:O:A Metal Battle held around the world since 2003. Since then, he combines the metal scene around the world for the Wacken Open Air festival. The competition was supported early in his career, a large number of groups, such as Drone, Torture Squad, Battle Beast or Hammercult.

This international music competition, supporting young underground band without a label. This is the reason why Metal Battle grew more than 40 countries joined the competition. Countries such as Canada, Mexico, South Africa, middle East, Bulgaria, China, Japan, have joined this global network to select one group that will represent their local scene at the international final at Wacken Open Air.

This year, Russia will for the first time the national selection of the best metal band of the country, which will have the opportunity to break the audience on the most legendary metal festival in the world!

Traditionally, the finals will be held on the stages of the WET STAGE and HEADBANGERS STAGE of the festival W:O:A. At the end, the jury will select the top 5 groups, which will be rewarded with material and cash prizes.

In addition, the final of the Metal Battle the W:O:A is a forum for all parties where they can mingle with producers, managers, booking agents and labels.
Participation in the selection of the W:O:A Metal Battle is literally your ticket to the music industry, the world tours and stadiums!