Sadwave fest on August 24 in Moscow 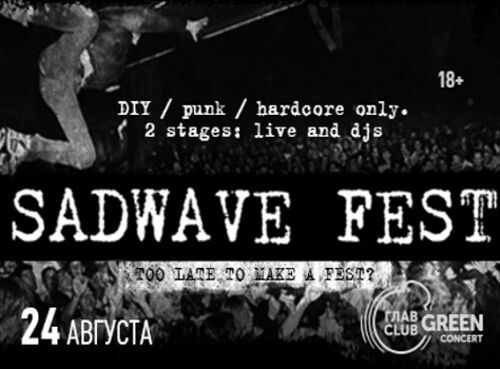 August 24 CONCERT in the GLAVCLUB GREEN festival will be held under the auspices of the DIY webzine Sadwave that since 2011, writing about punk rock in all its forms, including non-musical.

Formally, this is the first festival of Sadwave, in fact, the editorial Board organizes concerts for more than five years. The most notable events, the authors of this project call a series of charity festivals of Maximum Rocknroll Presents, which was annually held in Moscow in 2015. It was a show case studies of current underground music, part of the funds from which went to the creators of the oldest punk magazine on the planet, Maximum Rocknroll. For 40 years he went out every month in San Francisco and closed in may of this year.

Sadwave Fest kept the concept of their festival predecessors, the editors of the webzine will present in GlavClub all the fun that happened to DIY punk and hardcore lately. The festival will feature 10 diverse guitar teams and several DJs will be a big DIY-market with the band, the merch, records and books, as well as vegetarian food and beer at special prices. Tickets for the Fest Sadwave also deliberately made as accessible as possible, the cost starts from $ 100.

The festival will take part:

"Pozory"
Tomsk noise-rock trio, moved from Siberia to Moscow. Angry music with a desperate female vocals, released one of the best local albums of 2018 ("Maiden of grief").

"Summer lightning"
Dance-punk from Moscow and Minsk. Songs about love and alcohol under vigorous dance accompaniment.

"Sisters"
Punk project of Petrograd Vova Gray and Maxim Tesli from the rap group "He is young" (Maxim also sings in "Puppies"). For fans of the Swedes Viagra Boys, and other relevant European punk.

"Shadows of liberty"
Veterans of pop-punk from Moscow. Playing with 2004, on account of 6 full-length albums. The last one, "Absurd", was released in April.

"Noisy and threatening antics"
Nintendocore Duo, who moved from Omsk to Moscow. Furious and desperate music, a lot of emotion and wallowing on the ground.

Kytowrath
The new wave of Russian heavy metal, which incorporates the best elements from the titans of craft: Mastodon, Bolt Thrower, Lamb of God. Last year, the band recorded one of the best Russian metal albums lately — "Dominion War".

"Nazarbayev Terror Machines"
Noise-hardcore band from Moscow. Are incognito, performing songs in the Kazakh language (and quite a bit in Russian).