Meet at the festival "Babushkin sad" 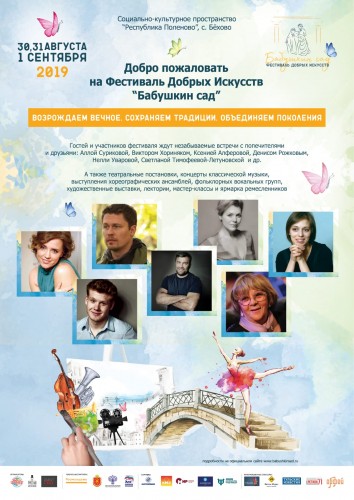 The timing of the festival:
from 30 August to 1 September
The venue of the festival:
Polenovo Republic, 110 km from MKAD on the Simferopol highway., Stary Oskol, Belgorod obl
A visa is required:
for citizens of Russia is not required

Alla Surikov, Mikhail Porechenkov, Nelly Uvarova, Ksenia Alferova, Denis Rozhkov, Natalia Bochkareva – from August 30 to September 1, "the Republic of Polenovo" landed a real starship troopers. It was here, on the banks of the Oka for the second time will host the festival of good arts "grandma's garden".

Music, theatre and film on the background of the stunning natural reserve "Polenovo" – we can safely say that analogues of the festival "grandma's garden" does not exist in Russia! This year on 14 acres will run from 10 thematic areas. Guests can watch performances of famous artists and beginners groups, listen to lectures, participate in master classes and to attend creative meetings with famous artists.

For the first time the chance to Express themselves will have Amateur teams and actors. Open stage is a new festival project "grandmother's garden", where the participants will be evaluated by professional jury: Vadim Medvedev, Irina Shvedova, Svetlana Timofeeva is letunovskaya, Max Galitskiy, Tatiana Likhacheva.

And those who learns the world through the camera lens, will be able to show their work at the "film Festival". Is the contest Amateur cinema, which are and game films, and documentaries. To analyze the participants ' projects will be the jury, headed by well-known theater and film actor Viktor Horinyak. In the framework of the "Festival" will be held a meeting with people's artist of Russia, film Director Alla Surikova, who will personally present his film "Full speed ahead!".