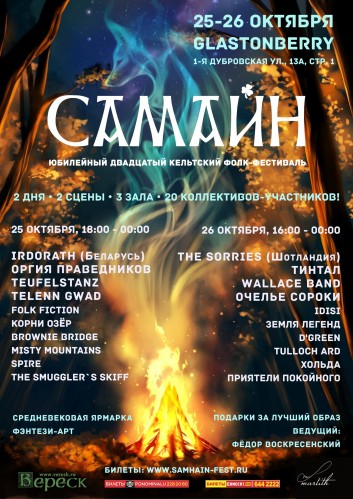 The timing of the festival:
On 25 and 26 October 2019
Площадка:
Glastonberry
A visa is required:
For citizens of Russia is required

On 25 and 26 October at the club Glastonbury will be held on [samhain_2019|anniversary Celtic festival "Samhain"].

For twenty years the folk clan in Moscow is fueling the fires at the end of October - as did the ancestors for thousands of years before us. Celtic and Slavic soul are strikingly consonant with the desire to mark the transition of the bright half of the year into the dark, thanking summer for gifts and preparing for the long winter. Samhain - thin time, the transparency of borders, a delicate balance between the living world and the spirit realm. FAE - the inhabitants of the hills - we can easily stop at the light, and you can never be sure who will be in front of you in the night of Samhain.

Everyone is welcome to travellers. Whoever came - you at this celebration. Nod the redhead nymph in a dress from the October foliage, greet an old friend whom I hadn't seen since the spring, let the familiar strangers to captivate yourself in a concoction of dance. Ahead of harsh winter, and here is the last heat.

Two rooms of the club, Glastonbury, named after the ancient Irish mounds, dowth and Knowth - will become a meeting place of worlds. Don't try to find a night in one and day in another, or find some other logic to what is happening - better to just trust the mirror. The ball is ruled by music, and here happen the most unexpected and impossible of the meeting.

Two dozen incredible musical groups from Edinburgh, Minsk, Moscow, Saint-Petersburg, Kazan, Izhevsk, Bryansk, Voronezh - will take the stage of the club Glastonbury, but the main essence of what is happening does not create them. A whirlwind of dancing, chatter and laughter, the clink of mugs and kisses, Heather pattern on the dress and the variegated colors of the kilts, the glitter of jewelry and the eyes of every guest in the evenings co-Creator of the festival, throwing wood on the fire of Samhain. If you want to take breath - go on a treasure hunt at the fair of craftsmen, take a deep breath in the pub on the ground floor of the club and back again - without you, the holiday is not a holiday.

The fun doesn't put it in his pocket, to later be deployed in winter nights - main here and now! There are only two days to live everything was postponed for later. The last fires will burn down at midnight. And may the winter be kind.

The twentieth anniversary of the Celtic folk-festival "Samhain".
On 25 and 26 October, the club Glastonbury (1st Dubrovskaya St, 13A, p. 1).