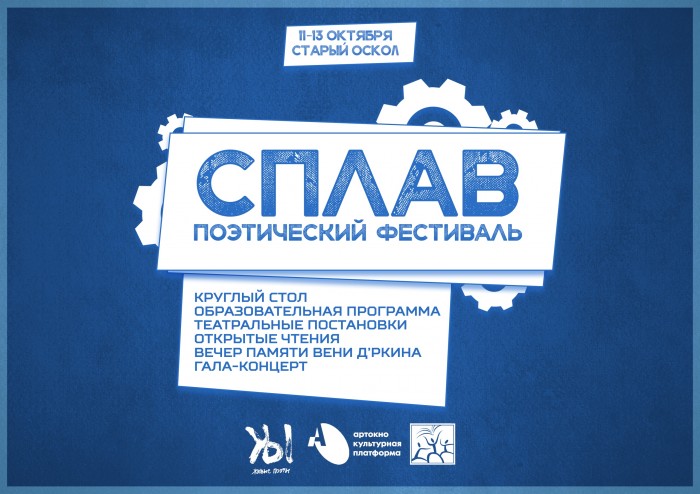 The timing of the festival:
From 11 to 13 October 2019
The venue of the festival:
"Iceberg Premium Hotel" Dolgaya theatre, Museum "Train!", CDC Gornyak, shopping centre, BOSE, concert hall, Stary Oskol branch of the University of Misa.
A visa is required:
For citizens of Russia is required

"Underwood", Alisa Grebenshchikova and Dmitry In the ground will speak at the poetry festival "FUSION"

From 11 to 13 October 2019 in Stary Oskol for the first time will host the poetry festival "FUSION", organized by the cultural platform of the ART WINDOW project of the charity Fund "Art, science and sport" and the team of the project "Living poets." The goal of the festival is to draw attention to regional tion of modern poetry, raising the level of literary education.

The festival will be attended by poets Dmitry Vodennikov, Anna Senicheva, Andrei Orlov and Lev Oborin, the band "underwood", actors Alice Grebeni Cova and Pavel Artemyev will perform Vasily Urawski, Anna "Umka" Gerasimova, Sasha Gagarin (the group "Samsara") and many other writers from Stary Oskol and Belgorod, friends and sponsors of the project "Living poets" from Moscow, Pet-ROSATSCH, Nizhny Novgorod and other Russian cities.

"Poetry in Russia is approximately the same as with rock music. Some do toil that she died, others that are alive, and others think it's rap. The value of any initiative is important. Scribblers know that it is important not to be silent! Opportunity now provides more than the past. And the future will give more than the present" - Vladimir Tkachenko, a Russian rock musician, songwriter, one of the founders and permanent member of the band "underwood".

"Today, the poetry is far from the mainstream of modern culture, it exists as a separate community with all the signs of living wide tradition for all ages. If this element is not channel, it will be replaced in the kitchen, turning into a Bohemian gatherings with port wine, characteristic of samizdat in the second half of the 20th century, adjusted for the Internet and the ubiquitous rap. But contemporary Russian poetry worthy of a greater fate than episodic online content. The energy of authors is so high that the festival of music and Poetica-

sky can collect the same number of people. And there you will see the benefit-happy Darnah poets, spoken in the rhythm and music of the living of the modern word," - Maxim Kucherenko, Russian rock musician, songwriter, one of the founders and permanent member of the band "underwood".

Free tickets to all the events, as well as additional information about events is available on the website of the cultural platform of the ART WINDOW www.artoknofest.ru