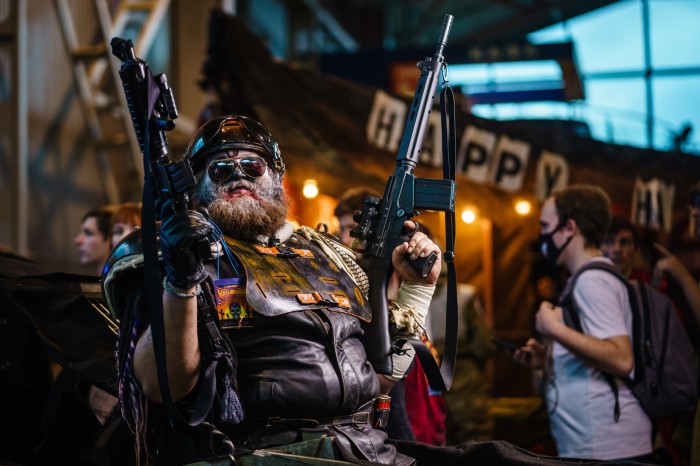 "It" and "the Joker" is still meet: a traveling circus was the main theme of the festival "StarKON: Halloween"

2 and 3 November in St. Petersburg will be held StarKON: Halloween in the entourage of itinerant circuses. Fight with zombies, a detective quest, a stunt show themed game VR-rides, film screenings and of course the night party.

What is the StarKON: Halloween? Family amusement Park in the style of itinerant circuses of the United States. Offers 10 interactive booths and ominous scenery, carnival, 500 participants in the images of favorite characters, unique themed fair, screenings of films, chat with artists and bloggers, performances of magicians, jugglers and acrobats.

On the Main stage audience waiting for the parade shows and performances. Circus "Fantasity" is preparing a special program and illusions, and "Jump Energy" will show a fascinating show on Jarrah. For those who have heart never stops at the sight of a somersault on 3 meter altitude, the boys have prepared a special solo number on the ring.

The exhibition area introduces visitors to the ten fantastic universes and allow you to get into a real traveling circus and visit the wild West saloon fight in battle tournaments to test their strength in battle with zombies.

Art zone "of Starcon" will introduce you to the amazing artists, sculptors and authors of comics. "Utopia Show" and "Other publishing" will present their new comic. But the surprises did not end there: the festival will start selling comics "Stan Lee meets Marvel heroes". And the publishing house "Wizart" will show a continuation of the graphic novel "the New centurion" with exclusive artwork for the festival "StarKON:Halloween". Saint-Petersburg, November 2-3 For those who like to do myself: "Wunderground" will teach the basics of animation on the event.

For moviegoers "StarKON" together with the "Other movie" was prepared by screening the cult film by David Fincher "Fight club". And lovers of night views is waiting for "Night of horror".

A play area prepared for preschool scale that will attract the attention and small guest, and the adult fans nastolok and PC. Especially for "StarKON: Halloween" has created a unique version of the game "Secret Pennywise". A "Chronospace" prepared VR-attraction with horror. There is a place for future players: 2 and 3 November will be held the tournament in Mortal Kombat 11.

For adventurers "StarKON" prepared terribly exciting quest through a fantastic universe. Heroes of the quest will have to wait on the stands with tasks of different complexity. The best prizes take the strongest.

Traditionally, the festival will host the cosplay contest. This year the participants will adapt the images of familiar characters under the circus theme, to compete in 10 different categories for prizes from the festival partners.

The first day of the festival promises to end with a terrifyingly loud: offers a night party with a show program and dancing.

StarKON: Halloween — the bright autumn festival in St. Petersburg! Hurry up to buy a ticket for the biggest party: starcon.pro