On 23 November, the festival Abstractly will celebrate the sixth anniversary in the new club 1930 Moscow 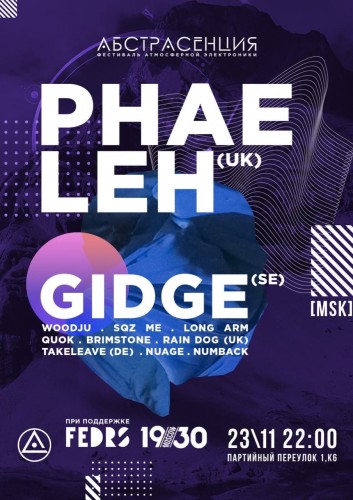 At the end of autumn the festival of atmospheric electronics will celebrate a birthday in the capital club 1930 Moscow — a new location in the center of Moscow, how will sound the actual producers from different countries and cities. A Grand line-up will complement visual installations from a team of media artists.

In the framework of the festival will feature 11 artists, headed 4 foreign headliners. English sound, bring the legend of the British electronics Phaeleh, the style of which was cultivated on an impressive collection of vinyl and was influenced by Boards of Canada, Aphex Twin, Tool and Plaid. North mood will be set by the Swedish Duo Gidge, for the first time competing in Russia. Their music is a mix of organics and electronics, unrestrained dancing and incredible atmospherics. Percussion and drums Gidge recorded in the forests of his native umeå. Germany are just two of the Berlin project — Rain Dog and Takeleave. Both electronics are residents of the cult Project Mooncircle. Several generations of the label will perform at the festival together with German colleagues live sets will play Long Arm and Nuage. After a long lull in Abstractly with live program will perform Woodju.

Club 1930 Moscow located on the territory of Electromechanical plant named after Vladimir Lenin. On 23 November there will be a real feast of atmospheric electronics with an outstanding lineup of artists, live performances and powerful light show.