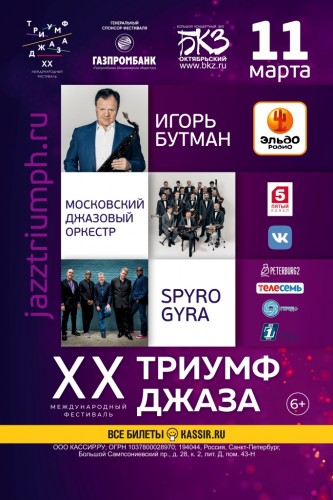 The timing of the festival:
11 Mar 2019
Площадка:
BKZ "October"
A visa is required:
For citizens of Russia is required

11 March in Saint-Petersburg in BKZ "October" will open the XX anniversary of the "Triumph of Jazz", the headliner of the concert will be Spyro Gyra. This American legendary jazz group first performance in St. Petersburg, participants of the gala opening concert of the festival will also be Igor Butman, Moscow jazz orchestra and special guests. The festival will continue in Tula and completed a three-day program of concerts in Moscow.

The group Spyro Gyra - twelve-time nominee for a Grammy award and one of the most popular and commercially successful bands in the genres of jazz fusion and smooth jazz. The group was founded in 1974 and continues his active concert work, being a frequent and a welcome guest at the world's largest music festivals.

Almost every album has become a significant event in the musical world. Confirming the reputation of a unique and highly professional team on the contemporary jazz scene for four decades, the band Spyro Gyra and each of his new work demonstrating the inexhaustible creative potential.

At the beginning of the new Millennium world-famous saxophonist Igor Butman, famous as a jazz producer. In 2001, he created one of the largest and most successful festivals of the world level - "Triumph of jazz", which became a real cultural phenomenon in Russian music.

Help.
In 2019 the Moscow jazz orchestra under control of Igor Butman celebrates 20-year Anniversary. Over the years the band has established itself as one of the leading orchestras in the world. For 20 years, the musicians regularly represent our country at the most prestigious festivals in Europe, Asia and America. In 2018, the big band became the world's first orchestra to perform on the main jazz event of the planet - All-Star Global Concert for International Jazz Day.