"Cockroaches!", Plan Lomonosova, BALLS, and other: the festival PunkRupor to be! 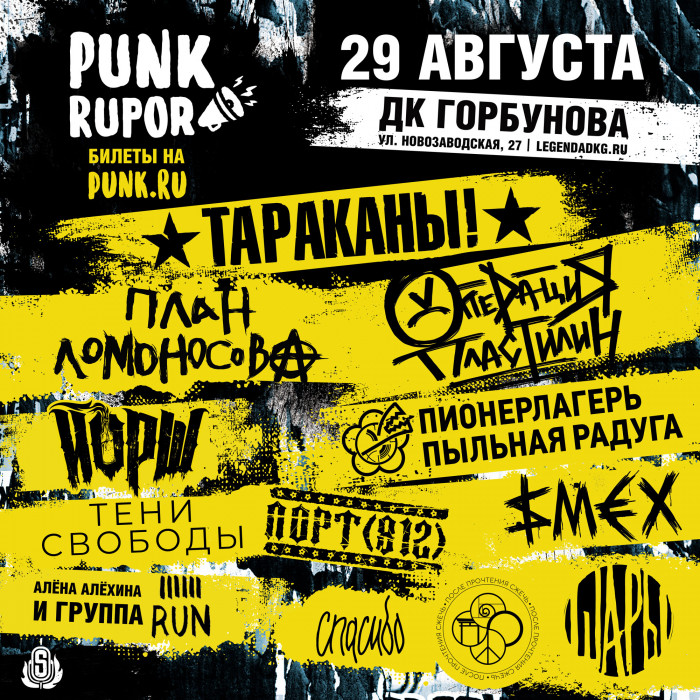 The timing of the festival:
29 Aug 2020
Площадка:
The Gorbunov Palace of culture
A visa is required:
For citizens of Russia is required

In Moscow for the first time PunkRupor festival — a new festival with a long history!

It all began in the first half of zero. It was then that Ilya Ostrovskiy (in the future, the legendary producer of KUBANA festival) and Dmitry Spirin (the leader of the cult group "Cockroaches!") established the independent record label "FM molchit records" and released several compilations under the name PunkRupor. The purpose of these collections, and subsequently the namesake of the festival was the promotion of young and talented punk bands.

After more than 15 years, PunkRupor returns, changing the concept, but without betraying the root values of punk rock. Also, the festival will be presenting a completely new portal of the same name, telling about punk culture, located on a long-familiar address Punk.ru.

PunkRupor festival will be held at DK Gorbunova on the territory adjacent to the legendary Palace of culture. The street will be located a full food court, a large variety of activities and entertainment for guests of the festival.

On 29 August, the last weekend of summer, the festival stage will rise PunkRupor musicians from around the world: "Cockroaches!", The Rumjacks (Australia), Turbobier (Austria), Rantanplan (Germany), Port (812), "Shadows of Liberty", The Other (Germany), 321RUN, Pyogenesis (Germany) and many others!

Soon the quarantine will end, and the whole of Moscow will take to the streets in search of new musical experiences. And in PunkRupor promise a lot!

Soon will be announced the second wave of participants, and while the cut in the music at full — PunkRupor approaching!