The stage of the festival "Heroes of world rock" will go down in the history of rock festivals! 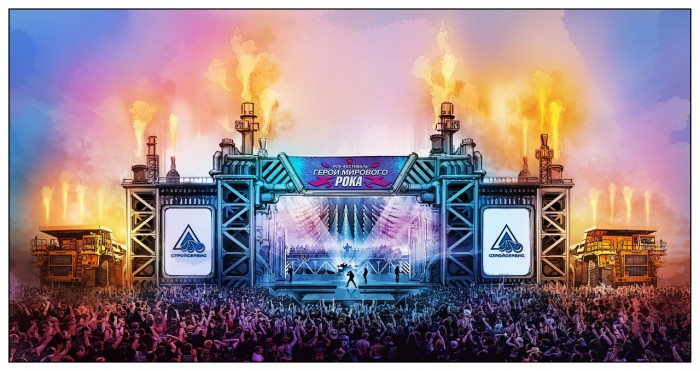 Photo source:
The press center of the organizer

Two weeks left before "Heroes of world rock" — the main summer festival, which will take place on July 27 in honor of the 25th anniversary of the company ZAO "Stroyservis". The festival impresses with its scale, combining the power of this rock and top show. This year the audience can not only enjoy music, but also to see the stunning art-object — a scene, which has no analogues on the technical equipment and design idea on any rock festival in the world!

Scene is the heart of the festival, the place where applies the energy from the performer to the audience, so its design is extremely important. On the realization of the art object in Kemerovo are working around the clock 100 best professionals of Russia. Stage construction is a unique construction, which embodies the power of the industrial Kuzbass, the epitome of the power of coal and metal, and reflects the mood of a real rock-concert. The designer uses the coke oven and steel beams that frame the entire structure. The height of the stage without pipes up to 15 meters, and the height of the largest pipe is 6 meters. Just on stage, it took about 4.5 tons of metal. All pipes are hand-painted specifically for the festival. The design stage is decorated with two screens, which will be integrated into the scenery and creates a single composition with them. Every detail of the scene is planned so that the audience got the maximum enjoyment from the festival "Heroes of world rock".

Unique link of stage decoration will be a real BelAZ, whose strength is striking. Brought them with a slash "barzas Association" of the company ZAO "Stroyservis". The largest machine in the world will be a lights festival "Heroes of world rock", for their strength they shall outshine the stars tonight, because the audience is waiting for a Grand light and pyrotechnic show. Fire the surface of the stage will ensure the complete safety for the actors and festival guests to enjoy the stunning beauty of the show.

Preparing for the "Heroes of world rock" began over six months ago and attracted the best Russian artists and decorators. Scene design in Kemerovo have developed a well-known worldwide for its innovative ideas Aleksey Usanov, recognized as a genius of stage design. In the asset master planning for Russian and foreign film festivals, including Looptopia Music Festival in Taiwan, the Electric Daisy Carnival in Las Vegas and Alfa Future People Russia. The projects of the artist is always unique and amazing.

The embodiment deals with the project D-Construction, one of the largest in the Russian market. It has design, fabrication and installation of scenery in Day of Russia on red square the concert dedicated to the 70th anniversary of the great Victory in the House of fans Peru FIFA Word Cup Russia, at festivals Electric Daisy Carnival and Alfa Future People.

The organizer of the festival, NCA company, conducting the largest festivals in the country.

Last year the audience saw an incredible production of the festival "world Heroes of rock", this year it will be extraordinary! Believe me, what you will see in Kemerovo, will be a true legend of stage design in the history of rock festivals. Company ZAO "Stroyservis" is striking in its power, and the scene of the "Heroes of world rock" is it to reflect that!

On 27 July, the festival awaits guests from 15.30 hours. Admission is free! You will long remember a performance by world-class musicians that have become legends of rock music. It Accept, Within Temptation, HammerFall, Royal Hunt and. Presenter Nikolai Fomenko.