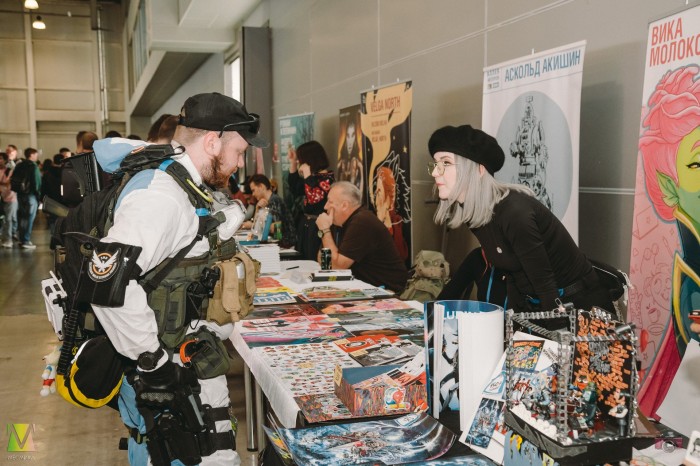 The largest festival of Comic Con Russia will take place from 3 to 6 October 2019 in the exhibition center "Crocus Expo", Moscow. The event will be held simultaneously with the fourteenth exhibition "IgroMir".

Comic Con Russia is the most massive and memorable event for all lovers of contemporary culture. In 2018, the festival received more than 170,000 visitors. More than 200 companies, including Disney, MARVEL, Sony Pictures, Nintendo, "Caro-Premier", "Nashe Kino", "Twentieth Century Fox CIS" and many others, showed it to the Comic Con Russia their projects, and in a shopping district located more than 100 shops with Souvenirs and fan paraphernalia.

Over a five-year history of the festival of Comic Con Russia came stars such as Nathan Fillion ("castle"), Misha Collins ("Supernatural"), Alfie Allen ("Game of Thrones"), Rutger Hauer ("blade Runner"), Christopher Lloyd ("Back to the Future"), Danny Trejo ("Machete"), M. night Shyamalan ("the Sixth sense", "Glass") and many others.

This year, according to tradition, in the framework of Comic Con Russia will host exclusive presentations, panels and film screenings. The festival will feature novelties from the world of pop culture, and the actors of cult movies and TV series will meet with fans and take part in photo and autograph sessions. Special guests "Authors Alley" Comic Con Russia will be the legendary creators of comics, and famous contemporary artists and illustrators.

The largest exhibition of video games "IgroMir" 2019 will be held from 3 to 6 October 2019 in the exhibition center "Crocus Expo", Moscow. The event will be held simultaneously with the sixth festival of pop culture Comic Con Russia.

Exhibition of interactive entertainment "IgroMir" – this is the most significant event for the Russian gaming industry. In 2018, the "IgroMir" and Comic Con Russia was visited by more than 170,000 people. Members of the "IgroMir" were such companies as Blizzard Entertainment, Ubisoft, Activision, XBOX, PlayStation, ASUS, ACER, Nordic THQ, Intel, Microsoft, GIGABYTE, "BEECH", "M. Video", and many others.

Special guests of the event in 2018 were the singer Helavisa (Natalya O'shea), founder and leader of the group "Mill", and the writer Dmitry Glukhovsky, who presented the game "Metro. Exodus". In the framework of the "IgroMir 2018" was held showmatch for the game CS:GO eSports part of the team Silver Snipers.

In 2019, the exhibition "IgroMir" will be held for the fourteenth time. Visitors to the event can see the latest projects and participate in testing of trial versions of the most anticipated game releases and win exclusive prizes! The best hardware, gifts and the most promising gaming news – only on "IgroMir" 2019!

The mode of operation of the exhibition "IgroMir" and Comic Con Russia festival:

To view photos from the festivals last year, according to the link

To read how did IgroMir 2018 is possible here.