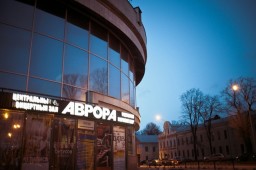 AURORA CONCERT HALL is within easy reach of the legendary cruiser, on Pirogovskaya embankment, 5/2, which is a ten minute walk from the metro station "Lenin Square". Unique round two-level room AURORA with nine Windows overlooking the Neva river and the major sights of the Northern Capital, designed for large-scale events and can accommodate 2,000 people and 400 of them are located on the comfortable Seating areas with tables having a good view. For convenience, VIP area and dance floor have separate entrances, cloakrooms and toilets. On the second floor of the institution is the Aurora Bar, which is on four screens, visitors can see the live broadcast of the concert of the large hall, and Smoking room. In АURORA CONCERT HALL has its own brewery, several draft Beers from which guests can enjoy in any of the three contact bars, a restaurant, allowing you to have a delicious bite. The concert hall is adjacent to the hotel "Saint-Petersburg", which gives the opportunity to settle the guests and participants of concerts to the area. Modern sound, lighting and projection equipment makes any event at the AURORA CONCERT HALL unforgettable. Since 2010, we have featured such artists as Imagen Dragons, Aquarium, Megadeth, picnic, G. Hughes, A. Makarevich, IAMX, Chaif, Parov Stelar Band, V. Butusov and Yu-Piter, Deep Forest, Mill, Cinderella, Pilot, M. Portnoy, Chizh and co, Poets of the Fall, the Night snipers, Rage, Beasts, Tanzwut, Tequilajazzz, Lordi, Tree, Anathema, D. Bilan, C. Norman, L'one, Onyx, E. creed, Therion, MOT, S. Vai, MC, Noize, Infected Mushroom, Little Big, God is an Astronaut, Artik & Asti, Secret Service, Leningrad and many others.