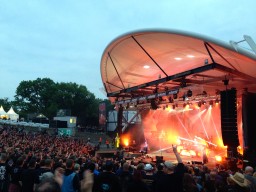 Some of the festival season begins in April, but I downshifting frenzy only applies to mid-June. And even this festival was not planned and was spontaneous and almost involuntary decision. As the initiative txctl was chosen RockFels, which takes place annually in Germany, near Koblenz. Very picturesque rocky hills (what an oxymoron) adorn the banks of the Rhine, in the area is scattered with castles various degrees of destruction. Some even have funny names such as Schloss Schloss Katz and Maus. Well, everything in the world should be balanced, right? And in the midst of all this beauty popisuje wormed amphitheater is the perfect venue for any kind of cancerophobia events.

In General, a special location - the key to at least the "memorability" of the festival. For example, hell forget the festival, held in the ruins of the castle (Dark Troll), or in the natural cave (Prophecy Fest)... or even just in the woods (Wolfszeit).
So in the hands of the organizers of this event have already been fat trump card. The second trump was the sound. Openeyry not always good sound, and it is clear. Try it outdoors, in any weather, organize everything so that every note of every instrument and the vocals changes from languid whispers to piercing screams - could be heard well, everywhere and everything! But then whether it is in the natural acoustics of the area, whether in new, more "cushy" equipment... the sound is not prikopat.

The line-up is always the case for everybody. And I'm not a fan of the local repertoire. But the group was a major, major, who won a name for himself and the crowd of fans. Gotthard, Tarja, Queensryche, Axel Rudi Pell, Powerwolf and others. It would seem - well, a perfect festival! But no.

The ticket price is 115 Euro is what caused the first hmyk confused. But what to do, sometimes for quality you have to pay quite expensive (see Meh Suff for 115 CHF for example). Nuuuuuuuuu, I thought, and began resignedly to enter a credit card number.

When training camp every need good to the festival surfaced of the mysterious item: it turns out that camping do not use charcoal grills. Strange, of course. But to hell with them. Increased security requirements and the desire to maintain a pristine lawn after it is three days of producat couple of thousand people - well, people like to believe in fairy tales and entertain vain hopes. Well at least the gas burner was allowed.

Another confusion overtook us when it came to security and informed us that the pavilions (such large tents on the legs) are prohibited. What?! How so? Heat 32 degrees, the sky is cloudless, and you don't allow the pavilion? Yes everyone here in the next half an hour is enough sunstroke! Of course, the people showed the wonders of creativity and pulled one that was in the style of a kind a makeshift roof. The pavilions maybe banned, and try to deny that these incredible designs! Security ate it and rolled. No one understood, nothing pleased the pavilions and what is their danger to the heritage, protected by UNESCO... Not everything in this world is given us to understand, alas.

Shortly after noon on Thursday began the concerts and the people pushed aside Gelande zone, where the stage, slowly moving the crowd and you can buy an oil-pretyranny a piece of fast food. And then... to pull-up towards the public there was a stream of people back. It's simple - it turned out that gelende impossible to pass with bags. Any bags of any sizes, except that the waist bags. Pochemu????! - people howled at intervals of fifteen seconds, as soon as the next victim was wrapped at the inlet due to small woven microscopic backpack or shoulder bag. The answer to the question "why", no one knew. Relying standard excuse - "I was told to say/do, I don't know why, I just work here". Rukalitso and again rukalitso, in short. Drinking horns, incidentally, also fell under the ban.

Well. People to the invention, the blunt end obey not love, so I was not the only one who went against the system. What do we do? We put all of the bags in the pockets. Well, what if they stick out, if you had it filled with stolen apples? It's just three minutes and 15 metres of a checkpoint, where lawlessness prevails guards. What we've got in the bag? Phone, wallet, battery pack and cable, telephone, handkerchiefs, Allergy drops, and of this little blanket. On the lawn there for her to lie down on the stone harnesses the ass to spread.

PI***d, as usual, snuck up on me: the blanket - not!!! The categorical prohibition! Why? And all for the same reason. "I-so-told-me-I-don't-know-I-just-do-as-say." Rage take my breath away, prompting the decision. The blanket was tied around his neck - it's not a blanket at all, it's a scarf! And try prove the opposite! In thirty-degree heat. So what? My throat is weak, I get cold easily. No scarf - no way.

And it was just a shame if this nonsense is only applied to the area of the "cordon". As with the bags - the main thing that it was not at the entrance, and then go as you like, no words can say. But we had only to lie down on this blanket on the lawn... Like literally within a minute ran to the guard. Remove the blanket, is prohibited! He generally only saw her, because the blanket really small, almost completely disappeared under us.

And the finish is the fact that it is impossible to lie down on the stone seats. Sit on them, stand in the shoes, to cast them in a beer - can. And to touch back - no way. One lady in front of me was sitting, and then just got down and put my head on my knees to my boyfriend. It's not even lying! But vezdessuschih guard came running with a cry: "Liegen been verboten!!!"

I don't know how anyone, but I felt under the total supervision in a prison. Step right, step left - all not! And what will happen next time? Ban sunglasses? Shoes above the ankle? The handkerchiefs?

Well, that is NOT necessary, but is present, we decided. Bans were really through the roof, the other one delusional. Now let's talk about what was needed, but what was not. The first point is the so - called depo, or pfand. In Russian- a Deposit for the glasses. A good measure against littering the area. Buying beer, pay for the drink and a glass. Handing the glass back, get your back a couple of euros. The price of beer in a couple of euros this Deposit is sooooo noticeable and people carefully hands over Tara. And if someone is drunk, or neglect the glass of your thrown away or lost, then certainly there is someone, this glass will pick up and get for him the cherished coin. Here, in the absence of stimulus, the people threw the glasses at his feet, and after the first group, the ground was almost covered crisp-rustling plastic carpet.

Another funny thing: the festival was not Shuttle buses. Despite the fact, incidentally, that on the website they wrote that the bus is. Hell no! From the station in the village, at the foot of the hill on the hill walks regular bus service. But no marking that it is a bus to the festival, no arrows and pointers - nothing. But we're not born yesterday, the bus I found, though not immediately. But the bus ambush. It only runs from ten in the morning. What to do if you go at seven o'clock? or at eight in the morning? And this is not uncommon, many have a long way to go and every minute counts. The logical answer would be a taxi. But Murphy's law or just a little known, but is common German raspizdyaystvo showed itself in all its glory.

The village has three Grand taxi. First the current goes from 11 am. The second room does not exist. And the third will not travel, man has retired and the car was sold, and my phone's still falls in Google. It's like the icing on the cake: even to hell shall go. The decision, however, was found with the grief. Called a taxi from a neighboring town, it got us on the ferry (!!!) and cost us dearly.

What else is usually essential in describing the festival? Well, the food was very mediocre, rather weak. Is that Breakfast at the local tourist restaurant should be highlighted: they were good live. And inexpensive. The rest of the food, especially at helende - cheap fast food for a fortune. Drinks - too shocking. Remember soda for 4 euros, whereas usually on small festivalyah sell it at half or two euros for the glass. The beer was relatively worthless. A choice of three varieties. One donkey's urine, the second - banal, but the taste is normal Erdinger, and in another place was a local place, for good. But guess what was the problem? Praaavilo, a ginormous queue that had to stand for half an hour. And who wants to stand for half an hour for a beer? Yes, and this beer was out Gelande, so on the way there and back would have to pass through control-Sonnie.

Parking and camping were separated. Someone might consider that a plus, some minus. But they were very close to each other, and that's good. And lawn camping pleased. Not for nothing do they so he was shaking that much Greely was banned.

And at the end of the story summarize: Yes, the amphitheater is cool. Yes, the area is very beautiful. Yes, the sound is excellent. But there are plenty of festivals that offer the same. But they have a huge list of bans, not neglect and disregard for guests. But there is hospitality, there are efforts to make the festival comfortable and cozy, and have a desire to see their guests for next year.

And the photos - here.