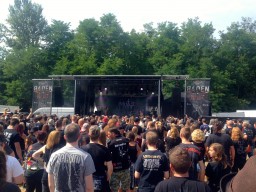 Near Basel there is a mysterious place Weil am Rhein (Weil Deswegen...!). There phone goes crazy and welcomes you every five minutes in France, in Germany, but mostly retains connection with the Swiss network. There crouched a little (man on one and a half thousand max) and extremely cosy festival with a bad name Baden in Blut.

Festival day, so you are no tents and queues to the shower. But there is a great, relaxed atmosphere: no checks, no queues, no theft, and stubborn security. Three Beers... No, four! A wide selection of soft drinks, among which as many as two non-alcoholic Beers. On gelende no crush, at any time you can come to the stage. And the most important thing! Great line-up.

This year was especially pleased Harakiri for the Sky, for some reason renamed enthusiastic audience in Kamasutra in the Sky. And a very pleasant impression left Mantar. Them there, by the way, only two, but they burned like Napalm. The rest is also not blundered, especially well guys I went with San Francisco Bay Area - team Death Angel, who became our "twist" on the cake - the last of the cupcakes Caliban we have left. Age there, legs Bo-Bo head after drinking no ale, and the bed after eleven in the evening especially enticing.

Total summary: the festival was well worth the money (50 euros per day of the event), organizers are working toward improving conditions (the food last year was not at all edible, and this year seemed to come; and has put an additional picnic tables under the awning from the sun that finally cool), a group of very decent around here, we're really close and convenient (the last transportation - tram in Switzerland - was about half a second, if I'm not mistaken). So yeah. Next year we should go there again.

And, not to be unfounded, here's the pictures.