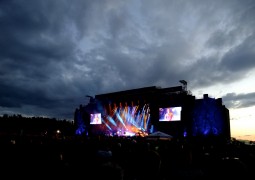 The trend is that large festivals always lose a little. Too high degree of commercialization, too dirty, the queue to the toilet, in the shower, do not get through tubes upon arrival and departure - the flaws are endless.

But there are festivals, which despite its respectable size still manage to withstand the bar and provide a decent quality of rest from everyday work.

Summer Breeze and, of course, is such. According to official data how many thousand forty-five people? It is quite possible, and even fifty. Nevertheless, it is quite comfortable and pleasant. If an early call, then the entry will not be any problems. We showed up on Tuesday, and since the exit of the highway to the campground we spent an hour and a half at a stretch. However, people told Ghost stories, though on Wednesday and Thursday at the same distance people needed 4-5 hours. Well, just wanted to say - "semidominant!" Camping for the most part pleasant, with a good lawn. And the soil is resistant to blur. From every drop of rain turns into "chocolate" the ocean, like on a big festival in the North of Germany. And if there is any goo - dudes immediately send the equipment with the mountains of wood shavings, which not only hides the dirt, but very cool smell. Double the profit!

By the way about the rain. Apparently, the organizers of Samarita sold his soul to the devil or I don't know who else, but without magic there is clearly not done. Traditionally, the festival great weather. Rains or no. Warm but not too hot - the sun periodically hides behind a light, translucent and very high clouds. Nice breeze, not too strong, but sufficient to achieve the effect of blows on the face and helps to algarinejo. So attention - don't forget the sunscreen!

This year literally the day before the festival the weather threatened daily torrential rains from Wednesday to Sunday inclusive. And here came into play the magic is in the tangible result, it rained only in the night from Tue to Wed and on Friday there was a storm warning with a rather impressive heavenly shower. And some very threatening leaden clouds simply crawled by, just pokracovanie on the horizon. Miracles!

Maybe it was the fact that this Samaris was special. This year the festival celebrated its twentieth anniversary, the sunset and the audience was expecting.

The line-up of the festival is always a varied and interesting collections of groups. Whether coincidence, or someone in the organization excellent taste and wonderful flair. Mainly in the assortment of metal of all varieties, this year leaked punk and hardcore, which is also nice. I don't know how, but I dragged myself a few groups whose albums I want to the collection. Samaris always throws up something interesting! But in addition to pre-announced groups on Wednesday unexpectedly made Powerwolf, In Extremo and Amon Amarth. The latter was announced on Thursday, but on Wednesday they also pleased the audience with a sudden full-fledged concert.

This year we waited a couple of controversial innovations, and good or bad is an open question. First, gone is the tent over the T-Stage. On the one hand, the space in front of the stage became more. On the other, the entire right half of the "stall" was gone from the scene down, and you can see there was not that bad... was not Visible at all almost nothing. But the left half rose from the stage and formed a sort of barely perceptible amphitheatre. And that was quite enough to sit comfortably and survey the whole scene in detail.

The second surprise was the two scenes with new names. Summer and Breeze. Well, as for Wacken, the guys have decided to rename the scene, thought we could not guess. It is one and the same scene. But how is it that this can not be, because the performances they were alternately every five minutes. No way this can not be, five minutes to prepare the stage after one performance group to another. Really. Not to prepare. But you guys came up with the trick. In fact, it's such a big double circular stage, and she turns towards the audience that one side (Summer), the other (Breeze). And while one group of happy people, behind the stage prepare the site for the next group. And most of these five minutes is enough to rotate the scene. The solution is fresh, definitely interesting, but nasty conservative Morel in my soul still resists and says that the old way, two different scenes, it was better. And anyway, the grass was greener.

However, I was evident that people with a double stage was more than in previous years, before each of the single biggest. But maybe it's just that this year, in principle, the people were at the festival more. Really, everything seemed closer that something. Exacerbated this impression, and the fact that the first day was open only half gelende, where T is the Stage and the Camel Stage. And yet something messed with toilets. For some reason, they became noticeably smaller, and this year there were no urinals. Absolutely strange decision, directly affecting the length of the queues to the toilet and piss on the quantity of fences people.

As for gastronomic delights, the differences from last year is not particularly observed. All the same Asian, Indian food. Pizza, fries, all sorts of bread and buns. The usual place was and stand with black food. The Yam fries black color, bread, black color, black sausages; tomato ketchup, however, normal red. But black caviar for some reason was not. Even weird. Funny feeling when you get a completely black bun. Think, Hey it was on fire. Expect rock-hard texture and bitter coal taste. And then suddenly the teeth too easily dig into the freshest bread, ears catching the barely audible crunch of the crust and of the tongue touches the delicate flesh of fresh bread. This is the notorious cognitive dissonance in all its gastronomic glory.

Drinks, of course, also did not bring much surprises. This awful Beck's was everywhere, plus in a couple of places you could grab the wheat. Mineral water, Coca-Cola, even the milk of the cervix - strawberry and chocolate. And on helende was a wonderful whisky bar, where she had a drink in the glass (!). Plus territory was scattered cocktail stands with primitive, but still a choice Nepia. And Yes, that awful cloying vezdessuschih Ficken. Yes, that's right. This stuff is called Ficken, which in German sounds like "fuck". I don't know why this liqueur is so named. Because it's pink? Because it's sweet, so that it is all inside together? Or it's just shitty marketing? But fact is fact, so fast is the name to remember.

Deserves special attention the situation with the campsite. In addition to regular camping, there are three alternatives. The first is, of course, VIP. About it especially will not say anything, because I'm not such a flight of a bird lived with all the other ordinary mortals in the camp. But I know about the Green and Camping areas for large groups. Green camping - this seems to be a smart thing. Its advantages are that there is much quieter and much cleaner than a regular tent spaces. And there are cleaner toilets and queues they aren't that long, especially at rush hour. But its drawback is that very quickly the place over. That is, if your subtle nature wants a restful sleep at night, take your time with armor. The spring seats will remain.

And yet, right in front of the entrance to helende is a vast territory, where allowed by reservation only. But to make the order special.place only if you have a large group - 20 heads. But good organizers will bring you your own little blue plastic toilet. Or two. Or even more, depending on the number of people. In principle, the idea is good, and especially attracted by the prospect of their own toilet. But the place is pretty filthy - noisy, all the crowds go by, though not usually come to your territory. All the roads around worn to dust, which flies in the dry weather in the air and hammered into the eyes and nose, and the rain turns into a true bakinskoi mess. No, of course this is an exaggeration, and the organizers do not tolerate manure, and immediately covered with sawdust. But still live there so expensive probably not.

And that's probably all that comes to mind when you think of Summer Breeze. Anyway, despite some flaws, the festival definitely deserves the attention and the money spent on it and leave. And Yes, about money. A little more than a hundred euros - well what is that price? Give me two!