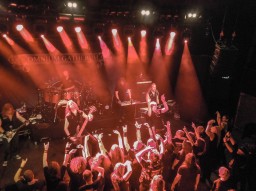 Live in the heart of Europe convenient. In particular because there is a huge range of different concerts and events, pending whose eyes light up and hands reach for the credit card to buy a ticket, and certainly-just to get to the concert. But sometimes one day there are just two events on which you would like to attend between "definitely" and "kick it as required." This day was Saturday, 11th November 2017ого.


Six months ago, I said to myself in the calendar, the arrival of the WASP, and was looking forward to celebrate with Blackie and the team 25летие cult album The Crimson Idol. But the day was approaching, and reviews on future events flashed one more concert to go I wanted no less: joint statement Stam1na (Finland), Skálmöld (Iceland) and deeply loved me Omnium Gatherum (Finland).

I probably would have tossed in thought, where would I go, if fate had not made the decision for me. A week before the concerts, all tickets for the WASP's sold out, and I decided that so be it: visit the glorious capital of Switzerland, will meet with a new club called the Gas Boiler (Gaskessel, Sandrainstrasse 25, 3007 Bern). And I swear, I'm not sorry.

Despite the disgusting weather, so typical for this time of year, the club was pretty well filled. Vskidku, there were about three hundred people, that are already present in the speech itself the first team. Stam1na has pleased us with incendiary, but not very slender trasacco with the Changeling progressive and heavy. But it sounded rollicking and fun and created a good mood... along with a great alcohol selection at the bar. They say that the dude from Apocalyptic, which is Perttu Kivilaakso, periodically flexing with the group in live performances, but this time I did not catch it.

Pleasantly surprised by the speed with which one group replaced another. Probably not passed and 15 minutes as all the changes were made, including the sound check.

The sound, incidentally, was at the club that is necessary. Maybe it was the domed ceiling, and that almost the whole concert we spent on the balcony almost above the stage. In the first row at the railing. And no hustle, no stress... beautiful! By the way, this elegant second floor were placed sofas of colour options and tables, creating an additional feeling of comfort and a kind of intimacy.

Crown Vikings Skálmöld replaced the Finns and the audience cheered. It's funny that tubby keyboard player (Gunnar Ben) during the sound-check was dressed in a stylish t-shirt HAM (Ham). Don't know if that group or some abbreviation of something, but it seemed that now POPs up from some other dude in a t-shirt CHEESE. Alas, the stereotype didn't work, and the concert Gunnar changed into something outstanding of its carnivorous tendencies.

From our balcony could be seen as boiling down the crowd, and towards the end of the performance on the direct orders of a charismatic unreal barefoot bassist (Snæbjörn Ragnarsson) in front of the stage formed a circular moshpit. Which is somewhat unusual in the context of this musical style, it's not grindcore some (said without a shadow of neglect, you don't think!). And Yes, you thought correctly, this is the comrade, who at one time had worked in the Swiss ensemble Eluveitie live performances.

Under such a recognizable motif of the title track Luoto from the album Beyond 2013ogo of the year came on stage Omnium Gatherum and the hall roared. Despite the fact that the audience slightly subsided (probably melodic detail is not so popular in wide circles of metalhead like Viking and folk), in spite of this fact the atmosphere was replaced with carbon monoxide at a fun and incredibly sensual. The group with the first chords of set emotional contact with the vast majority of listeners and at this point has ceased to exist all around, in addition to music.

Expect the Finns played a lot of material from his last two polnoformatnogo Beyond and Grey Heavens. It was fun to watch, as Jukka Pelkonen (vocals) a couple of times pressed someone in the audience a bottle of beer, took a SIP once or twice, and then just put it somewhere on the stage. And the unfortunate robbed a fan of the stretched claws in an unsuccessful attempt to recapture his property. But nobody was upset because his neighbor did not mind. Especially if that middle - of the adored group.

I think it was one of the few concerts where despite the setlist had a desire to listen again and again. But all good things must end, and the happy fans went disorderly groups in the November cold rain, to digest impressions and sleep.

And lastly, here's the setlist of the last concert:

—
Magenta
Рок/метал концерты 2017
RSS
No comments yet. Be the first to add a comment!
Log in or Register to write comments