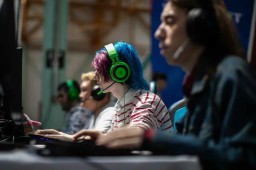 November 17 will be held an open tournament computer sports within the project of support of youth initiatives “Narayana”. The project supports urban youth in communities by helping the potential of young people in various fields of sports and street subcultures, with an emphasis on the development of creative abilities, gaining useful skills, new knowledge and skills. Friendly duels in the game club is a great way to test your strength and to show the possibilities.

Tournament DOTA 2 will be held on the Olympic system. After registration, all teams, captains are invited to attend the draw. Knowing their opponents, the team is pre-designated for them, and the stage of selection of characters for each team member. The main goal of the team is the destruction of the fortress - the last structure on the map of the enemy.

The map is the playing field in all matches in DOTA 2. It consists of two sides, one for the location of the troops the forces of Light, the other for the forces of Darkness. To win, players must break the enemy's fortress, the most important building in the center of each team's base. If one team destroys the fortress the other, the game ends and the team that destroyed the fortress wins. The fortress itself can't attack creeps and has a slow regeneration of your own health. It is protected by two towers and cannot be attacked until the tower is destroyed. The map is divided into three different lines: the upper, middle and lower. Each of these lines, one way or another, leads to the enemy base, guarded by towers set on the way. And this path to victory will not be easy!

To judge the matches will be: Eugene Tsar'kov and Sergei Savin

The event will take place in the eSports club Cyberlogawithin the same name, one of the largest networks of computer gaming clubs of Moscow. The club has three comfortable rooms. Here you can make new friends, to vent their emotions in competition with virtual opponents, and to enter a closed community and become a real competitive players were paid their winning prizes.

The best athletes will be listed in the wish list cyber command Cyberloga team.

Waiting for you at the address: the Ryazan prospectus, street Fergana, d. 6, korp. 2

—
Check it out
Новости
RSS
No comments yet. Be the first to add a comment!
Log in or Register to write comments