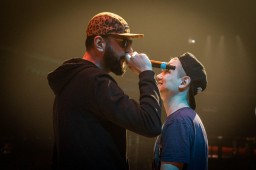 29 November with the support of the youth initiatives #Arrayone will be the doubles rap freestyle battle "Workshop freestyle".

The battle starts with the qualifying round. Couples are given a random word, starting from which they must rap-freestyle.

The outputs of the participants judged on a five-point system. Estimates are tallied, and the top eight pairs are in the tournament. Here the competition is held according to the Olympic system. The strong and the weak: the maximum score against the minimum, second place vs second last, and so on.

To one fourth is read for a single round, lasting 2 minutes. The round starts with the team with fewer points. If a couple have the same number of points after selection - lots shall be drawn.

Pairs face each other, get new themes, and compete with each other, reading from the queue on specified topics. From each pair of judges choose one winner.

In the semifinals, all participants will have an additional round. The sequence solves a lot.The finalists will be given extra round and a free theme.Our judges:

Dmitry "Gabonica the Viper" Egorov - the Creator of Fidelio punch club, the judge Versus the chief editor of "Sneakers"

Alexander Petrov Sanchez - founder of a series of battles STAFFKABATTLE, the main organizer of the 17th Independent Buttle hip-hop.ru

#rap #freestyle #нарайоне
—
One-two-one-two
развлечения
RSS
No comments yet. Be the first to add a comment!
Log in or Register to write comments