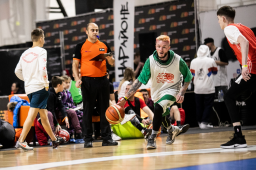 8 December in the Goals supported by the project of youth initiatives #Narayana held a street basketball tournament in the format of "MIX 2x2". This means that pairs can comprise both boys and girls. The tournament is part of a series of events project #Narayana, which aims to support sports and subcultural youth initiatives in different parts of the city.

"Areas of the Ball" — a modern sports complex, which includes 7 play areas that are suitable for both professional athletes and for Amateurs. For all who can not imagine my life without basketball or just wants to learn to possess the ball. 4,300 square feet of high-quality sports flooring, to gather with friends, meet new people who are close in spirit and active life position.

Tournament "MIX 2x2" is our original format, a series of games in the 2x2 format, where a team consists of players of different sexes - one girl and one young man (in the case of replace girl replace the girl, and the man - man). The maximum number of members of the team - 4 people. Rules of the following games. Duration: the game is played 5 minutes "dirty" time (last minute – "pure") or until 12 points. Gameplay: in the protection of the girls play against girls, men against men. On other points of the rules, the games rules of the FIBA 3x3 2018.

At the console: DJ Stick — our basketball DJ. He received the diploma on a speciality "the Director of the discos". His performances can be heard on the tournaments, Nike and CSKA, and in the best clubs and restaurants of the capital, where appreciate real hip-hop.

Waiting for all fans of street basketball and accurate hits at:

—
One-two-one-two
развлечения
RSS
No comments yet. Be the first to add a comment!
Log in or Register to write comments