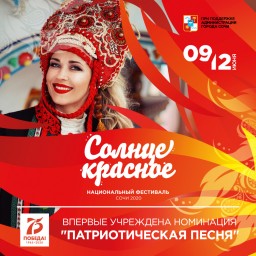 By happy coincidence, this year V the national music festival "Red Sun" coincides with the dates of the most popular Russian film festival "Kinotavr". The venue is the Olympic capital, Sochi. National festival "Red Sun"includes a number of measures aimed at the preservation and development of national culture of the peoples of Russia, to promote and maintain interest in the culture of different ethnic groups, as well as to adapt folk music to modern realities. A special feature of the festival is attracting artists of different genres to folk music.

According to artistic Director of the festival "Red Sun",singer, performer of folk music of Honored artist of the Russian Federation Olesya Evstigneeva because 2020 is the year of Memory and Glory, for the first time in the framework of the International music competition was established in the nomination "Patriotic song". It is noted that the Grand Prix of the festival will make this year 100 000. "National festival "Red Sun", in his own, unique phenomenon, - says Director of the festival Olesya Evstigneeva. Only at our festival on one stage, adults and children, Amateur and professional collectives, stars of the Russian stage". By her own admission, Olesya despises for the preservation of folk culture and wants to be considered not a relic of the past and treasure the present. To popular culture was recognized and was appreciated by the youth. The younger generation did not forget our customs and traditions.

The organizers promise a rich program for the guests and participants of the festival and, of course, residents of Sochi – the real folk festivals, the opportunity to participate in master classes, flash mobs and interactive, to meet the festival with star guests. Closing the festival will be marked by a Grand gala concert, which will take place on 12 June on the main square of the city of Sochi in Russia Day.

Waiting for You from 9 to 12 June 2020 in the city of Sochi at the V National festival "Red Sun". Remember that Red Sun shines for everyone!

—
Stasya
RSS
No comments yet. Be the first to add a comment!
Log in or Register to write comments