Korpiklaani: The coolest thing that ever happened to us in Russia are wonderful people in every city 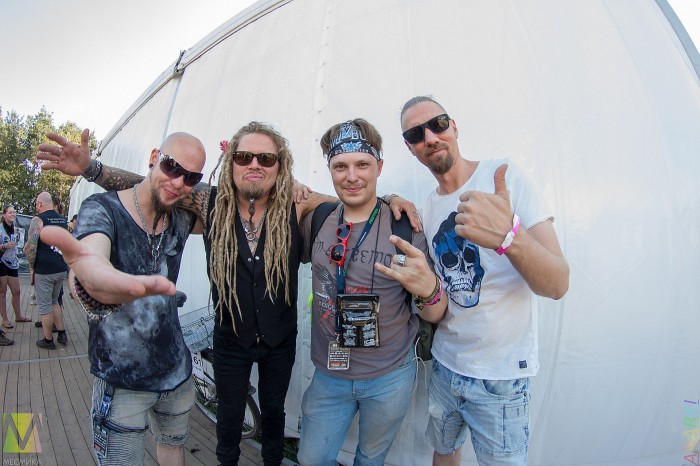 The forest brotherhood, or in Finnish Korpiklaani, widely known Finnish band, which, however, decided on a major tour of Russia, only last year. But the success was great and the Finnish guys once again go on a great journey across our vast country. At the German festival Wacken Open Air Mesika talked to Jonne, Tuomas and Sami about the upcoming tour, happiness in Finland and found out what unites the Russians and the Finns.

A big part of the cool folk groups come from Finland. Why do you think? Maybe in Finland there is a special magic?

Jonne: we have no magic, we're from Finland – for us it is natural. We go our own way where there is no reference to the present, it's just life. We do this in our musical path. Cool, if someone think so, but we're just trying to make good songs, as good as possible.

Sami: Well, I can say that Finland is a big country. There is a connection that a lot of cool metal bands appeared out of a population of five and a half millions like us, for example. We have innovations that occur in small population, which is the reason why things are going well. We have safe, good universities, have a job, the students get support – all this together has a similar effect that you speak of. If I'd been born in any other country, I would not be a musician. A lot depends on the companies.

Jonne: We were once happy by what is now said Sammy. Finland is a cool place, because we were happier once, than it is now. I think somewhere easier to live.


Your new album "Kulkija" will be released on 7 September, the first day of your Russian tour. Does this mean that the Russian audience will hear the album live first? And can you remember the brightest moment during his stay in Russia?

Jonne: Yes, exactly. And it's a great challenge to play for the first time our new album to the Russian audience. We had a tour a year ago, which lasted two and a half weeks. And it was absolutely an amazing experience travelling around the country. I didn't even realize how big it is.

Tuomas: We were actually pleasantly surprised. For us, the land of exotic and big, and I think that few Europeans had been as far as Moscow.

Jonne: The coolest thing that ever happened to us are wonderful people in every city.

Tuomas: We felt something special being there because there were a lot of people who've never seen us play live. Here in Europe, people see us two or three times a year, and in Russia there were people who were waiting for us for ten years! And for many people, the dream became a reality. And to share our enthusiasm with people was a great experience.

Jonne called Kulkija' "wanderer" and said that the whole album is a journey. What country is trying to get your wanderer?Jonne:the album contains only one character. And everything that happens passes through his eyes. It is everything that is life. But he also wants to kill herself.

Tuomas: there is a contrast between life and the dark side of death. You can find lots of different characters in the album, which you previously never heard in albums, Korpiklaani. And they are all trying to Express themselves more widely than ever before. And we are very happy.

Sami: If you are asking about the country, which, from trying to escape, it's probably something mental. He mentally tried to escape from our country, from Finland.


Two years ago wewere bsales Tuomas about the upcoming then a big tour, and he said that the visit many of the cities except Moscow and St.-Petersburg will be a great experiment. As you again go to Russia, your experiment failed and you decided to repeat the tour. What do you expect from Russia at this time?

Tuomas: We are expecting more people at our concerts, because Moscow was the biggest crowd we wherever it was played. It was special for us. And we hope that people who saw us for the very first time, tell their friends how fun and take your friends with you to a big party. I'm also just waiting for his return to Russia, to the territory of lake Baikal, in Irkutsk, there were a lot of things I'd like to repeat again.

Jonne: In Russia was really cool because we met great people who we were well received. For example, Tuomas was in awe of Siberia. He worked previously with the peoples of the Khanty, Mansi and Nenets, and they were very friendly, hospitable, in Finland there is no such.

Tuomas: it's Very sad that the image of Russia in the world is influenced by policy. It's really very unpleasant, because people mean much more than the government and they differ from power. And traveling around the world, we understand that government is not the people in the country. Do not pay attention to it - meet people, be with them – that is the true fellowship that comes from the heart.

Jonne: This is something typical of Russia that comes from the heart, and warms him more than in Finland, I love Finland and I know whereof I speak.

Is there any difference between the Russian and European festivals?

Jonne: In Europe, the festivals much bigger than in Russia. There I have only seen small festivals.

Tuomas: I have to say that we played at Folk Summer Fest. Russian folk-metal band is really cool. I don't know, but what I heard was really good music. We didn't know who they are.

People are different in Russia and Europe?

Tuomas: the Russian people are more expressive and energetic.

Finnish bands are very popular in Russia. Name three things connecting the Russians and the Finns.

Sami: a lot of cultural similarities, because we're near, so very hard to avoid cultural communication.

Tuomas: of Course, between Finland and Russia there is a huge story, especially in the Eastern part of our country. We have strong differences. If you go, for example, two hundred years ago, you will see that the border is not so big, on both sides lived with the same people and in district of St. Petersburg was a free trade area. The border was only for customs purposes. Of course we don't have so far to go and if we return to the present day, we see that political influence is great and the border became bigger and stronger, and therefore the difference more. But we also connects nature in any case. You have a very beautiful forest, the same as we have in Finland. We have a common knowledge of how to preserve nature,

Sami: And of course, folk music. You have more amazing melancholic melodies and we Finns love it.

Tuomas: Finland is also very popular musician Sorsakoski (Pekka Erkki Juhani Tammilehto, better known under his stage alias as TopiSorsakoski – approx. ed.). It is most important to us and love. He traveled to Russia in search of songs that he could translate into Finnish, and sing, and thus we inherit a lot of music.

Sami: of Course we appreciate the music that came to us from Russia, I appreciate the fact that I have a lot of Russian melodies for accordion and they really hard.

Wishes to the Russian fans waiting for you in the fall.

Jonne: I'll See you in September!