Rochester: Oomph! and the Russian Symphony orchestra – the symbiosis of classics and German industrial metal 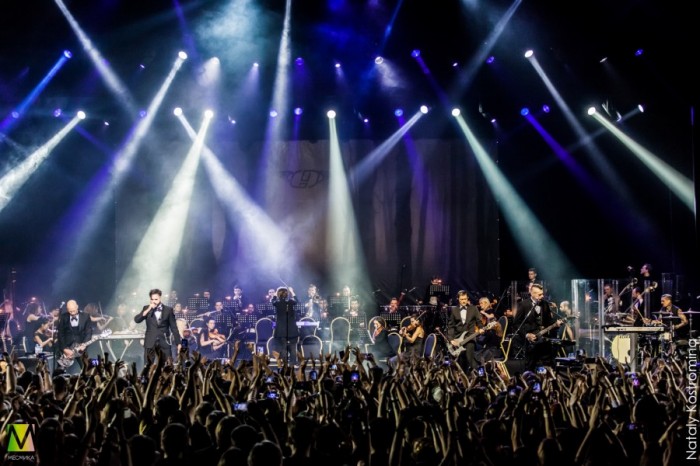 The Group Oomph! from the German Braunschweig has long loved and revered in Russia. Performances draw full houses, and the number of fans is growing every released album and conducted a tour. The secret of popularity is simple: a group experimenting with music genres, is not afraid of provocations and gladly presents to the listener with new and new creations. So we waited, and they again returned to Russia. This time was a surprise joint performance with the Russian Symphony orchestra.

For the German public presentations rock band with an orchestra is not new. As shared Dero GOI in an interview Macmice at the Wacken Open Air festival, accompanied by the orchestra have already been given to play on German festivals and open-airs. And now for the first time Russian fans have been able to hear them singing your favorite songs Oomph! together with the Russian symphonic orchestra Globalis. Two full concert Oomph! in Moscow and St. Petersburg, undoubtedly applauded by the most discerning fans of live performances, not to mention the fans.

At the Moscow concert of Oomph! 14 Sep gathered an impressive number of viewers. Dance orchestra concert venue Crocus City Hall was purchased fully vacant seats on the balconies and in the amphitheatre, at a quick glance, almost no choice. In the beginning did not leave a strange feeling of a mismatch in expectations (after all, a concert of the legislators heavy sound come from Germany) and numerous orchestral instruments on stage. Forward to a rock concert, and it seems as if the Philharmonic ran to the evening of classical music. But the German punctuality exactly at 20.00 to the accompaniment of violins on stage the band Oomph! Matching the General atmosphere, dressed in a three piece suit, the incomparable German rockers without long introductions Gekreuzigtзаставили only one to experience the full power of Neue Deutsche Härte. From the first guitar riffs became clear who runs the show here.

The setlist was classic. Classic not in the sense that what vladivar music lovers, not at all. Classic Oomph! is Das Weisse Licht (1999), Augen Auf! (2004), Gottist Ein Popstar (2006), Labirinth (2008). Good old metal motifs took a new turn in the performance with the orchestra. Oh, how smoothly was the guitar along with the violin and the bass guitar echoed the cello! Unity and musical extravaganza! If we speak of provocation, of course, to fulfill Der Neue Gott with the orchestra was a rather bold decision. "You thought that can not, and listen to what we've got!", proclaimed censorship of the word Dero from the scene. Turned out confirmed. And no matter what the initial statement was completely electronic, like did in 1991! A perfect read – acoustic, earned the song Auf Kurs. Along with the orchestra performance turned mysterious, vibrant and exciting. At the same time as Jetzt Oder Nie, Niemandи several hits group found a small digression, performed by the orchestra.

About talking from the stage. So how can Dero to keep the mood of the public, cannot, I think, no. Charismatic and energetic lead singer of Oomph! their positive charges, captures your attention completely, erasing language barriers. "I want to go through the metal fence to meet the beloved," so I felt the General mood of the crowd. Although compared to other concerts of rock groups preserved a presence of restraint in the behavior of the fans was not a slam, fights, torn to shreds shirts. The orchestra on stage played a role in this. I think that such a statement was interesting both for the group Oomph! and orchestra Globalis. Hall energy is transmitted to all performers. Did you like vigorously moving arms, desperately holding the bows of the violins, as they were echoed by the bass, drums and even a harp. Conductor, fragile and sweet girl, was full of bright smiles and enjoyed the performance of not less hardened German rockers.

Crocus City Hall - a glorious venue, with beautiful girls to ushers, security officers, and canine services. Closet, storage, clean and tidy – all that we so appreciate in large concert halls of the capital. The only thing I do not agree with the price of water in vending machines can be cheaper. Although city Hall is located near metro station Myakinino (dark blue line), however, due to the extent of megalomania around the shopping center Crocus city be prepared to wander through the labyrinth and the labyrinth of corridors. About the sound, the light and the overall impression of the concert of the band Oomph! the Symphony orchestra is better for us to tell the admiring comments of fans on social media. While the "bass is not enough" – not said just lazy. However, it seems to us that the platform for performances with the orchestra was very well chosen.

An additional surprise for all was that the gig with the orchestra was recorded on video. For video recording, answered the crackerjack team of RENEGADE CINEMA. And thanks (thanks!) malfunctions technology, fans were able to enjoy a repeat performance of three songs of your favorite band for an encore. So soon wait for new album and DVD concert video.

Silent violin concerts ended. After no less than mind-blowing performances in St. Petersburg, which took place on 16 September, the German rockers flew to Germany, to continue work on a new album. Happy fans waiting for the left to reconsider fan of Kama from concerts, to share experiences and photos. "Dankeschön, liebe Oomph!", - promise to learn all the lyrics in German until next year.

Photos Of Oomph! concert in Moscow in 2018 for the link.