Within Temptation: Resist in Saint Petersburg - the history of music by Sharon den Adel 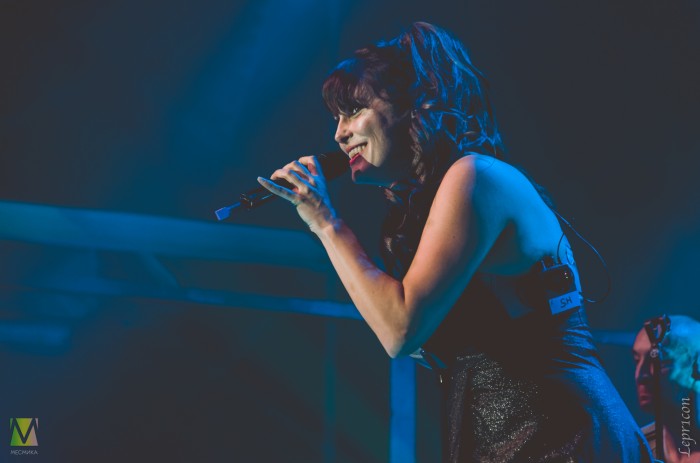 Friday, October 19, in the club A2 Green Concert sounded the last concert of the Russian part of the tour Resist group Within Temptation, who came to Russia after a three year break.

Saint Petersburg is the first city in Russia, which this year was visited by the group. Earlier, the team visited Krasnoyarsk, Novosibirsk, Yekaterinburg, Nizhny Novgorod and Moscow - they were waiting for thousands of fans and connoisseurs of incredible voices of Sharon Den Adel. Some cities picked up the group previously and knew what kind of emotions they will get. Other cities, such as Nizhny Novgorod, this flurry of emotions from the concert got the first time, and for them it was special.

The St. Petersburg audience, for the most part, knew what to expect from the concert. Many have come on the phones was the setlist for the tour, which almost has not changed, and on it we came was a t-shirt Within Temptation, which probably was purchased at the previous concerts. There was also a considerable number of visitors from other cities, who gently asked how to get to the club on the way from the subway to the site of the event.

Friday night, warm weather in St. Petersburg is replaced by the wind, appears on the scene, people with guitars and a woman with a white flag - so begins the song Raise Your Banner from the new album RESIST, which will be released in December 2018, and which is dedicated to the tour.

Thus, the beginning of the first song, explosion of emotions in the room running the guitar to the edge of the stage, clicks of professional photographic equipment from photopia, the appearance of Sharon, and... the beginning of a new story in length, seventeen songs. The second song sounds The Reckoning - song from the new album, which has already released a video and can be seen on YouTube. Sound evens out the sound so that the sound coming from the group was the most juicy and high quality. Fans send flowers to Sharon on the stage, hands raised in the air and show a goat - the symbol of rock. Next song you will hear Endless War - another song from the new album.

The photographers are removed from photopit, and starts the song number 4 - In the Middle of the Night. This song appeared in the album The Unforgiving, released in 2011. Changing the background and light show becomes reddish-yellow shades of light, and the fans are very excited about this song. They know for a long time, and they are definitely ready to hear it. Behind it, you will hear Stand My Ground, which appeared even earlier - in 2004 on the album "The Silent Force". Her powerful voice Sharon will vary from powerful to very soft and back. We must pay tribute to Sharon's stunning vocal range, she knows how to use it, thanks to Within Temptation songs have a distinctive sound, and if Nightwish can still change to female vocals, in the case of Within Temptation that's impossible - that voice like the voice of Michael Gorshenev, replace no one.

The same soft vocals fully manifested in the next song All I Need, released in the album "The Heart of Everything" back in 2007. Yes, in addition to the "three stripes" and "black-and-white days," dawn "emo" subculture and the other a symbol of that time, from the screens it was possible to hear such a stunning song. I must give credit that this album gathered a huge number of songs that remain popular to this day - "Frozen", "Our Solemn Hour", "Forgiven" and others. Mesika recommends in his spare time to listen to this album in order to feel the other 2007. We think that you will like it much more (but not promise).

A journey through the history of the group is ongoing and again the song from the new album Supernova. It is, in our opinion, there is something special. Live performance allows you to surrender to the music and immerse yourself in a musical trance. Very interested to hear how it will sound on the album. Behind her is a return to the past, and now, it sounds another song from the album "The Unforgiving" - Shot In The Dark - an amazing powerful and driving song that gives you shivers in the first verse and throws emotions out in the choruses. Frankly, even for the sake of this song is to go to the concert. Audio recording and Studio sound the energy will not give. What happened in the hall, it is difficult to convey in words. This is a must see and feel, and I think for the sake of such moments worth living.

Changing light, guitarists and Sharon leave the stage. The light falls on the keyboard, and so begins the introduction of the second part. The rear screen is covered with a veil of smoke, and the circle in the middle is black. Keyboard player strums his party is his time. The crowd cheers, and at some point, the drummer joins the game, the light comes on, there is Sharon and is the site of his incredible operatic voice - begins to play The Promise. Gradually tightened and the other band members and the show continues.

Then comes a Faster - version of Yandex.Music is one of the popular songs of the group, and it met a great success. Followed by sounds of Mercy Mirror, and then the legendary song from the album Hydra - "What about us?" or "Paradise". We must pay tribute, this song left the original voice track Tarja Turunen, with whom Sharon and sang this song, so you can evaluate it as in the video. Undoubtedly, unfortunately, this is not a festival HELLFEST 2016, where the song they sang together (Messika was there, too), but to bring Tarja in Russia for one song would be too difficult.

The concert is slowly coming to an end, and start playing those songs that we wrote above is the title track of the album The Heart Of Everything and well - known song from the same album Forgiven.

St. Petersburg's A2 club is one of the biggest clubs in the cultural capital and experiences of being there, he was quite densely filled. The audience came to the concert very different - from young people on the dance floor who heard Paradise and Faster, until the very adults in the VIP area, which is likely, in his youth he broke away under the Angels and hid tears behind Say My Name. However, these songs, unfortunately, was not performed, but replaced by music and starts with Mother Earth - a song from a distant 2000. This song was expected by many, because she is one of the trademarks of the group.

The musicians pause and leave the stage, the crowd applauds and waits for their return. This legendary game musicians and listeners. Two minutes later, the musicians returned and this is the part for the encore. There are two songs and the first one - What Have You Done, also from the album The Heart Of Everything that has become iconic, and I love and appreciate even those people who have little know the band Within Temptation.

The last song sounded a Stairway To The Skies, which is also the last on the album The Unforgiving. It ends, and completes a special magic that was at the concert all this an hour and thirty minutes. The final photo with the audience, Throwing drumsticks and guitar pick into the crowd, bowing and leaving the group. Rift is starting to sound Outro, people begin to pack up and go in the direction of the wardrobe.

Following the concert the group held in Finland, in front of their big tour of Europe almost every day (with few exceptions). Ahead of the more powerful sets of thousands or tens of thousands of people. Ahead of SOLD OUT s in the cities of Europe and thousands of happy eyes. Group until the end of December is in the way, and next year you can meet them at the anniversary Wacken Open Air festival, which will take place in early August.

It is difficult to say when will the next concert in St. Petersburg, as the latter was held in 2015, but you can certainly say that this concert was unforgettable, and thousands of people who were in the hall, it will leave positive emotions and memories for a long time. It seems that this day really is not in vain.

Team MUSMECI sincerely thanks concert company NCA for this incredible journey into the world of music. You make people happy for 20 years!