2rbina 2rista: Baron Saturday is waiting for you! 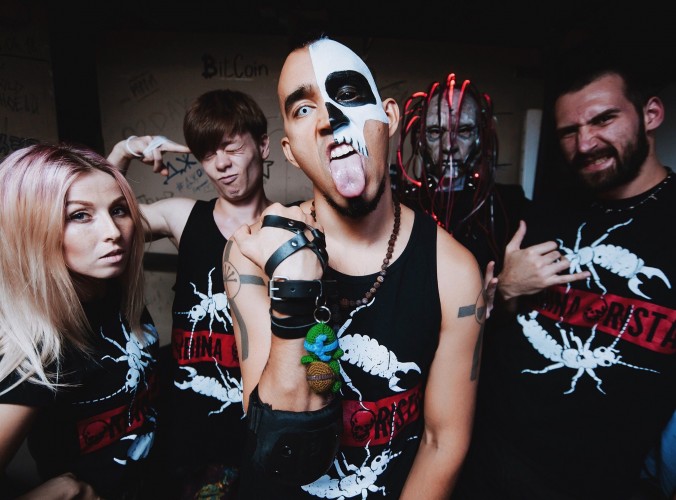 On October 21 in Saint-Petersburg club "Aurora Concert Hall" not for the first time made 2rbina 2rista anomaly of Russian rap that has no analogues.

2rbina 2rista is a unique project, which is the Creator Ranis Gysin, known as Rancho Garcia. In the main group consists of 4 people: Ranis Gaisin (Rancho Garcia), Maxim Shishov (Max Defiler), Arthur Galiakbarov (UAP), Anastasia Serebrennikova (Silver). Also at concerts, the group is accompanied by: Sergei Davydov (Padre Davis), Vyacheslav Rasskazov (DJ S. V. I. P.). The group is a mixture of nuclear Ural hip-hop, underground, dubstep, bigbite, punk and dark Caribbean ethnic group. 2R2Rсмешали in his music a variety of sound and got explosive hodgepodge. The group refers to their style as "Rap Nuclear" ("nuclear rap"), each a band is a bold show, not like the usual rap concert.

Closer to the launch, fans began to gather at the entrance in hope rather get in and get the most comfortable seats. The doors of the club for fans opened on time, the most committed fans instantly occupied the area near the stage to be as close as possible to your favorite artist, others discussed the upcoming concert, while others were relaxing at the bar, sipping strong drinks. Already by 20:00 the hall was filled to overflowing, and appeared on the scene DJS.V.I.P. He carefully warmed up the frozen crowd with their tracks. The headliners of the evening came on stage closer to nine o'clock, but great music and good company brightened the wait.

The band started their show with the song "On my grave" (Fuckality, 2017), then continued with the song "Baron Saturday" (an Australopithecus., 2016), a favorite of many. The hall was delighted. Live performances 2R2R there is always a certain atmosphere. Renta – founder and ideologist of the group, is a supporter of voodoo and complements the already rigid base of his brutal manner of execution. Fans especially celebrate the power, brightness and enchanting live performances of the group. This time the group presented fans with a new album, but I haven't forgotten about popular tracks that appeared earlier: "Ba-Ba-Dook" (an Australopithecus., 2016), "balls of Steel" (Nuclear Rap, 2014), Leaves (Nuclear Rap, 2014), Boodoo People (does Not meet the expectations of their parents, 2014) and others.

Exhausted, thanking the hall, musicians went off the stage under the endless applause, and after some time came to the fans, to chat, to sign autographs for everyone and take pictures. It was noticeable that the artists themselves and was pleased with my performance and how I met their fans. Saint Petersburg had a very warm welcome to the guests from the North. The artists promised to return next year with a new album, we just have to wait.