Everything, children, hare, have fulfilled lave! 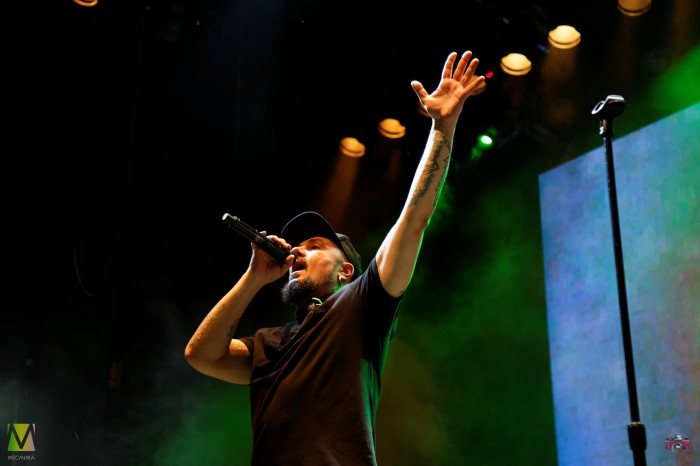 The third day of March in the Moscow club “ГлавClubGreenConcert” took place the concert of Belarusian rock group “Trubetskoy”. The boys were presented to the audience a fresh, released just a month ago, a record called "Moved a bit".

The leader of the team, Pavel Bolotnikov, led his team to the stage just ahead of schedule nine in the evening, for which he had special respect: not made their fans wait. And, by the way, was a lot. And entrance and VIP seat GlavClub was filled almost completely. A great result for the Minsk group!

"Trubetskoy" played from the stage as much as 29 songs, among which were like absolutely all the songs from the new album (that's really not an example of some groups on the so-called "presentations" play a couple of new products, and then once again plagued the old stuff) and most of the tracks from the previous. Plus, as a bonus, the guys played some of the best known songs of the group "Lyapis Trubetskoy": "hare", "Evpatoria", "Sparks", "Tank", "You cheated" and "dress white".

Two songs Paul sang a duet with rapper Aleksey "Sroom" with which they are familiar for thirty years. Once Alex played saxophone in the "Lapis", which he himself founded, a couple with Sergei Mikhalok. Now he has his own solo project. However, concurrently, he is the author of many compositions "Trubetskoy". What said Paul to the gathered audience. Hall thanked the newly formed Duo with applause.

Before the song "Tank" Bolotnikov said that he is a longtime fan of the game "WorldofTanks". The song "the Ninth wave", he introduced as: "a song from the Belarusian moreman moreman St. Petersburg".

General Pasha very much and often spoke to the assembled audience that is definitely a big plus. The most funny his phrase was, perhaps, the "zadolbali Winter, winter go to h**". Here is such a cry from the heart.

Declaring the song "May the heart", the singer Trubetskoy said very simply: "the Next song will sound in the Belarusian language. I know that translation is not required." A beautiful song with an interesting, unusual sound.

Introducing "MagisterBibendi", the title track from her fourth Studio album "kaleidoscope", Pasha said that it was time to introduce the team. Every musician, after it was announced, played a little solo on his instrument. And at the very end of the song guitarist, Ruslan Vladyko, and still singing.

Maybe just seems, but seems to be the most warm room met the good-old, time-tested hits the "rock". "Dress in white" so it was turned into a kind of semblance of a karaoke hall helped Pasha to sing every word.

Be nice to finish the concert with the song "hare". Well, that is because suitable! (actually, no, seriously, "Trubetskoy" played so what about the money I remember in the last turn). However, the group decided otherwise. Bolotnikov shouted: "Song, which you need to finish the concert, there!" And played the first chords of the unforgettable songs of Boris Grebenshchikov "Glasses".

In conclusion of his speech, Paul called out: "greetings from brotherly Belarus!" The musicians bowed and left the stage. The audience clapped, the concert was a success!