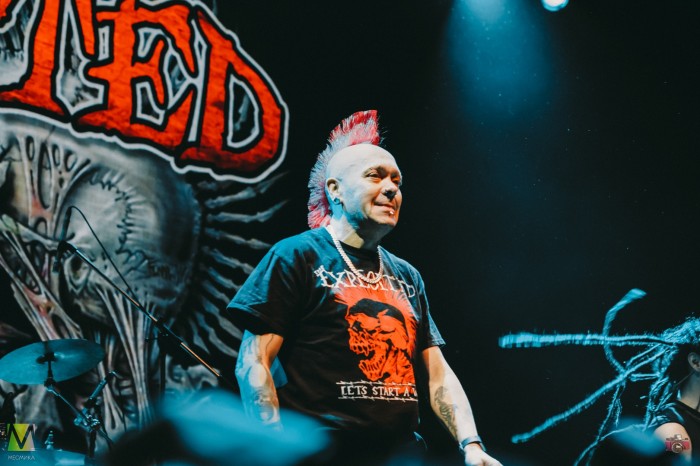 The Exploited came to Russia not for the first time. But this year is special. 40 years ago in Edinburgh was founded the group that later will bring fashion to the Iroquois, and painted with the slogan “Punk's Not Dead” walls will appear in almost every city in the world. It is the name of their first album will become a universal motto for punk-party in the following decades, in spite of almost the same slogan “Punk is Dead” Crass group.

The Exploited 40 years ago became the personification of all that was originally punk in its most non-commercial manifestation. In confirmation of his words, a group of Scotland famous for their crazy antics, carrying clubs, dressing rooms and hotels during their tours. And while fans for 16 years waiting for a new album, and the group leader Watty, Bukan experienced several coronary shuntirovanii, The Exploited, and 40 years have the right to proudly raise the flag with the three words “Punk's Not Dead”. To verify this, could anyone on March 2, in Moscow.

The GlavClub in Ordzhonikidze are not the first to take the Scots, in the year they were here. By its 40th anniversary, the band decided to treat their fans with commemorative merchandise, and even to the motives related to Russia. For example, many certainly liked t-shirt with Khokhloma and says “Pancks the notes of the dead”. It has enough people in t-shirts since the first arrival of the Scots, or in clothes with still alive then Crusts, that's where many of the Russian music lovers familiar with the work of The Exploited for the first time.

The concert itself was more than worthy. Moreover, Watty not getting any younger and for a new big tour he had to take seriously their health and 62 years is not a joke.

As you can see, the setlist included the songs for the entire period of the band. From “Dead cities”, which at the time caused a lot of noise in Britain and became one of the most successful songs, to the songs from the current album “Fuck the system”, such as “Never sell out”, “Why are you doing this to me?”. Every song on the setlist was in the hall of their ardent fans almost completely filled the club included as members of that generation, vydavlivaem disks on the top crust, and the younger rebels who, following a succession, listened to the words “Fuck the system” and “Punk's not dead” from the scene.

One of the most iconic songs of the band “Beat the bastards” appeared on the scene Anton Down from the group, FPG, which performed together with Watty. And on “Sex&Violence” almost anyone could obtain a possibility to appear on stage next to a group of musicians with a broad gesture has invited over 40 people to come up on stage.

With the departure of The Exploited will be completed an era in the music industry. And how would those who did not belong to this group, its influence on world culture can hardly be overestimated. And while Watty and his group travel the cities of the Earth, the banner of punk will not be lowered a millimeter. And about the concerts in Russia, the Scots will be happy at least every year.