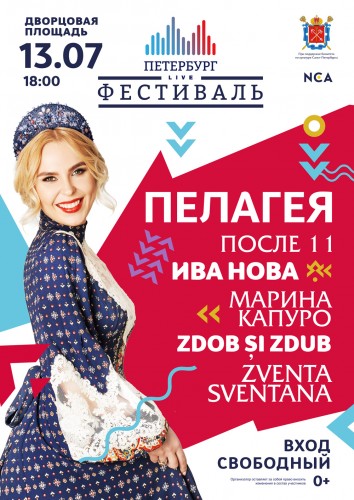 July 13, at the Palace square will be a truly major event — "St. Petersburg live". Favorite annual festival will take on a new meaning and will be dedicated to the ethnic diversity of culture of Russia and friendly countries.

Petersburg — the cultural capital and birthplace of many famous local musicians and large-scale festivals. That is why at the heart of the city on Palace square, was the birthplace of the festival, which has become a holiday and a cause for pride among local residents, a model for visitors from other cities and countries.

Folk festivals — a rarity in the modern world, so the need of the audience is increasing every year. Ethnic music is beautiful, varied and striking in its history, which originated much earlier the ancient Russian state. The different cultures became the basis of modern music, and to be a part of this culture is a real reason for pride. The festival will show the national colors in the center of St. Petersburg and will introduce all the guests of the festival with ethnic music, giving it a modern interpretation.

At the festival "Petersburg live" the audience will have a unique opportunity to enjoy a lovely summer holiday and a chance to hear stars of folk music. The headliner will be the popular favorite and a rare visitor of St. Petersburg — Pelagia. A unique voice and a wide repertoire of traditional Russian songs and romances made the singer the epitome of folk music, without which it is difficult to imagine the modern folk scene. Together with Pelageya in this day, on Palace square will perform the best original bands whose names are known to all: Zventa Sventana, Marina Kapuro, "After 11" and "IVA Nova". Outstanding musicians will perform songs that are so loved by all and who will sing the entire Palace square.

Festival "Petersburg live" will be held with support of Committee for culture and become a bright musical event not only St. Petersburg, but Russia as a whole. Come July 13 at the Palace square to share with the whole city on this beautiful day!

Entrance to the festival is free. Beginning at 18.00.

The schedule of the festival "St. Petersburg live"!