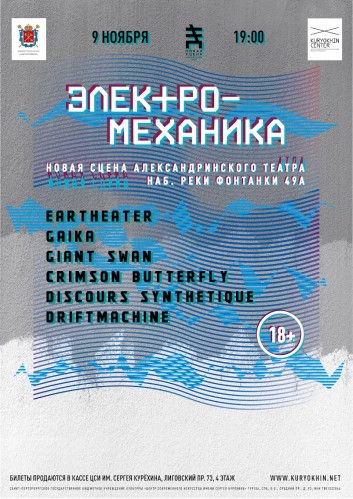 It is called "Basquiat in electronic music". Under the wing of a powerful world label Warp Records Gaika has released several high-profile music projects. In August 2018, in collaboration with Boiler Room and Somerset House Studios presented the audiovisual project "System", which is considered one of the most intriguing and innovative music events in the UK. 9 Nov British by Gaika will deliver the first and only concert in Russia in the framework of the XIV festival "Electro-Mechanics". The festival will be held in St. Petersburg at the New stage of the Alexandrinsky theatre. Tickets go on sale on kuryokhin.net.

Gaika - one of the most resounding votes of modern London. The singer describes his sound with the term "Gettogethers". Live performances Nuts is a physical reflection of the powerful, sometimes fiercely aggressive ideas, a call to action for a society that's tearing itself apart, but in dire need of unity.

Gaika – the son of immigrants from Grenada and Jamaica. His father was a scientist and music lover, had an impressive collection of rare music. Gaika began his musical career as part of the Manchester hard rap team Murkage. His anti-utopian futuristic sound, like transforming hiperrealismo and chaotic atmosphere of contemporary London in a dark melodic collages with heavy vocals, was first presented on the mixtape, "Machine" in 2015. In 2016, released an EP and immediately hit the TOP music charts in Britain. The Guardian describes the music as a mixture of "Caribbean dance traditions and the London mud, with a nod to the R & B, trip-hop, grunge".

Starting with hip-hop, and soul danchall, Nut for the first time performs solo experimental program on the Rewire festival in March 2017. Subsequent takeoff from the first solo release to record on Warp Records occurred just over a year. Debut album GAIKA Basic Volume was released in July 2018. The same The Guardian praised the album as "stunningly popular and impressive debut." The album received positive reviews from music critics and the press.

In August 2018 Nut in cooperation with Boiler Room and Somerset House Studios presented the audiovisual project "System", which is considered one of the most intriguing and innovative music events in the UK. A collaborative project born in Brixton musician (and also a graphic designer) with the world giants live webcast explores immigration, its influence on European music and culture over the last 70 years, after the appearance in England of the Windrush generation.

The singer in an interview with the Evening Standard said "we are Talking about how to literally draw a line in the sand and say, "This is who we are, and we are here to stay. You can't cross".

"Electro-Mechanics" will be held in Saint Petersburg on 9 November at the New stage of the Alexandrinsky theatre. The festival starts at 19.00 and will last until 5 am. The first names of the festival are already known to Gaika (UK), Driftmachine (DE), Heidi Horowitz (NL), Eartheater (USA), Classic Electric (St. Petersburg), Igor Starshinov (SPb), Discours Synthetic (SPb), Crimson Butterfly (NN). All the artists play live!

Giant Swan. The spirit of the British underground in St. Petersburg