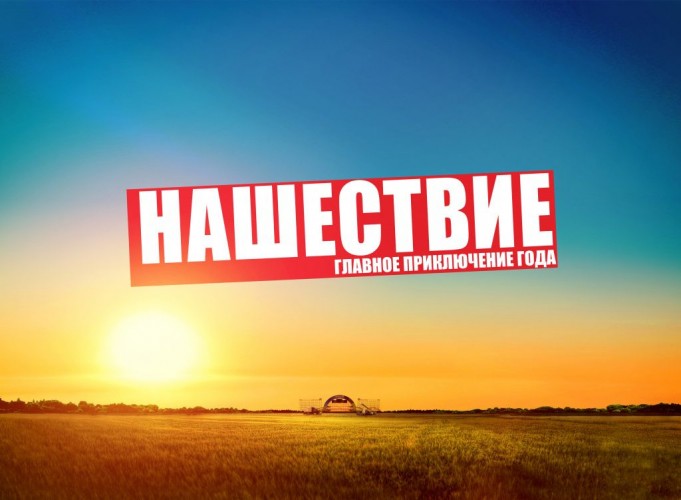 The INVASION is not just a festival, it is the most ambitious and large-scale open-air music, which is held in our country. From Thursday evening to Sunday evening, every day from early morning until late at night on the field the kings of continuous music drive, 800 kW sound, more than 80 of the best musical collectives of the country. The adventure of the year 2020 INVASION will take place on 24, 25 and 26 July in the village of Great Zavidovo Tver region!

The INVASION is the biggest and the most visited Russian open-air. Since 1999, the radio station "NASHE Radio" holds a legendary festival. About 200 thousand people annually gather in the Big Zavidovo.

In 2019, the festival celebrated its 20th anniversary, the musical festival was visited by over 200 thousand people. For four days, made 143 of the team, giving viewers a 6 000 minutes of great music.

The INVASION, which in itself is one of the most anticipated large-scale musical events, in 2020 will be filled with an atmosphere of carnival fun. The organizers will add colour to the annual festival, calling upon the creativity and imagination of loyal fans and new guests. A pass to the festival in costumes and memorable images will bring the audience in addition to bright emotions, a lot of nice bonuses.

This year there are new categories of tickets, as well as to accelerate the startup process to the Parking lot, ordering the disposition of vehicles and for security purposes, the audience has changed the rules of Parking of vehicles.

On "the INVASION of 2020" will be three tent camps: the Sverdlovsk, Moscow and Leningrad VIP. Tent city "Leningrad VIP" to spectators with tickets VIP with improved infrastructure, makeshift streets, lighting and power points for recharging mobile phones will be increased in comparison with last year and will occupy the territory of the former town of "Leningrad".

Tickets for the Park are now divided into four categories: "Motorcycle", "Car", "Van" and "motorhome". Now on the vehicle of each type can be stopped only by a certain category of ticket. Depending on the type of vehicle is issued a different number of Parking bracelets: one to four, which, in the presence of all the guests tickets to the "front" or FAN, will allow an unlimited number of times to go to the territory of the festival into the Parking lot and back. 2020 Parking bracelets can be obtained only if the ticket was made the entry of the vehicle into the Parking lot.

Another innovation of the invasion of 2020: buy tickets categories: SUPER VIP, as well as booking tents in a tent hotel on site of the festival or accommodation in a nearby hotel online produces. Personal tickets to the INVASION are only sold on the website nashestvie.ru.

"Unexpected" news: festival of the INVASION is postponed for 2021!